Bahamas ‘under attack’: Do more to combat FTX 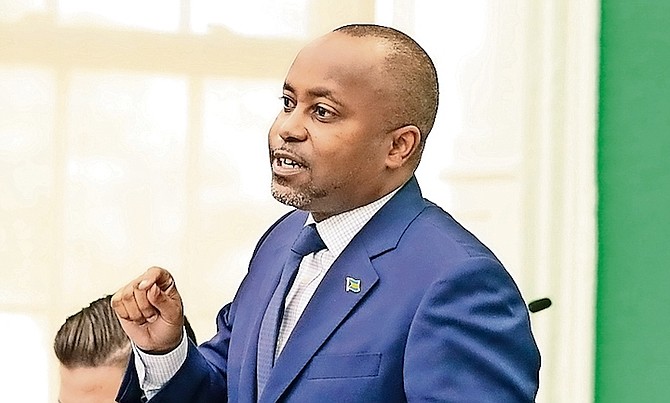 A former finance minister yesterday argued that not enough is being done to protect The Bahamas’ integrity - and that of its entire financial services industry - which is “under attack” from all sides over FTX’s implosion.

Kwasi Thompson, minister of state for finance in the former Minnis administration, warned in the House of Assembly that the country’s failure to properly defend itself from international criticism over the crypto currency exchange’s collapse was enabling outsiders to promote the narrative it was a “poorly-regulated jurisdiction”.

Fearing that this could deter high quality investment from seeking out The Bahamas, he added that “if we do not tell our story others will tell it for us”. The east Grand Bahama MP added that the attacks were not coming from “rinky dink persons”, but individuals of the calibre of a former Securities & Exchange Commission (SEC) chairman - a status that gives their views credibility and allows them to gain traction in international markets.

Mr Thompson, who called on the Government to hire an international public relations (PR) firm specifically to counter negative FTX-related coverage, voiced his concerns as the crypto currency exchange’s 40 Bahamian staff continue to grapple with “tremendous uncertainty” over their immediate fate.

This newspaper was informed that while FTX Digital Markets staff have not been formally terminated, or released, they remain “in limbo” and “a holding pattern” with no work to do some two weeks’ after the Bahamian subsidiary was placed into joint provisional liquidation by the Supreme Court upon the Securities Commission’s petition.

Well-placed sources told Tribune Business that the joint provisional liquidators have yet to meet formally with Bahamian employees, although there were suggestions conversations may have taken place with individual staff on as-needed basis.

The joint provisional liquidators could not be reached for comment before press time last night. However, Brian Simms KC, senior partner at the Lennox Paton law firm, and PricewaterhouseCoopers (PwC) accounting duo, Kevin Cambridge and Peter Greaves, will likely have been pre-occupied to-date with securing FTX Digital Markets’ assets, books and papers, as well as dealing with cross-border issues related to the US Chapter 11 proceedings involving other FTX entities.

The full impact of FTX’s implosion, one of the fastest and most spectacular corporate collapses ever given that it took place in just one week, is yet to be determined when it comes to the Bahamian economy. However, it is likely that multiple local businesses and their employees, especially those owed money, may have been caught in its wake. “They touched every sector,” one source said simply of FTX.

Mr Thompson, meanwhile, acted the Davis administration’s relative silence on FTX by demanding that “we must act to protect our industry”. The Government has largely allowed the Securities Commission to take the lead, apart from a brief statement in Parliament last week by Prime Minister Philip Davis KC, even though The Bahamas’ financial services and investment reputation continues to take a pounding from so-called international ‘experts’ and media.

“Our entire financial services industry reputation is under attack,” Mr Thompson said. “I recently watched an interview with a former SEC chairman, not some rinky dink person, but a former SEC chairman. He suggested offshore financial jurisdictions like the Bahamas are not well regulated. I know that is not true. What is important and worrisome is he did not make the distinction between crypto and traditional financial services or investment.

“The Prime Minister suggested that we act in the interest of patriotism. On this point he’s right. This is why I make these comments. The Bahamas is under attack. We are a well-regulated jurisdiction with the best talent in the world and, in the interests of our country, we must act to protect our industry.

“We are not saying enough to protect our industry. We are not saying enough about the overall direction of regulation in the crypto space. If we say we are leaders, then we should lead. Where are our experts speaking positively about The Bahamas, our laws and our future? Where is the communication strategy? Have we engaged an international PR firm to combat what is being said about us internationally?”

Mr Davis last week said FTX’s stunning collapse could not have been foreseen, or prevented, by regulatory action from the Securities Commission or The Bahamas generally even though digital assets industry players told Tribune Business they had become concerned about the crypto exchange - especially the value of its in-house FTT tokens - as far back as February/March this year.

He added that he was convinced that The Bahamas will emerge from the FTX debacle with its regulatory and digital assets reputation enhanced, but that is being put to the test like never before. While Standard & Poor’s (S&P), in maintaining The Bahamas’ sovereign credit rating at ‘B+’ with a ‘stable’ outlook, said this nation will suffer no “material adverse impact” from FTX but also warned that its failure is a “setback” to its digital assets ambitions.

Mr Thompson yesterday argued there was a disconnect between the House of Assembly, where MPs “pound their fists on tables” talking about how wonderful The Bahamas is, and international perceptions over FTX’s collapse. “There are real people out there in the international community who are saying The Bahamas is not a well-regulated place and do not invest in The Bahamas.

“Why hasn’t the Government met with the Opposition and, more importantly, met with industry to manage the international message in a non-partisan way? This issue is that big. Any forum where The Bahamas’ investment climate is mentioned, we will have to address FTX in any place in the world.

“In times of crisis, our voice should be heard in the defence of our jurisdiction and the direction regulation should take, and the direction the industry should take and the role The Bahamas should play. If we do not tell our story, others will.” Mr Thompson called on the Government to “meet immediately” with the financial services industry to co-ordinate strategy, then hire a PR firm to “combat the negative message being put out”.

The FTX debacle is becoming increasingly political. Its Bahamian subsidiary, FTX Digital Markets, was incorporated on July 22, 2021, when the Minnis administration was still in office. Dr Hubert Minnis earlier this week told Tribune Business he had no contact with FTX or its co-founder, Sam Bankman-Fried, prior to the September 16, 2022, general election, and nor did any member of his government.

That, though, does not mean there was no contact at a lower administrative or regulatory level. While the Davis administration fully embraced FTX and Mr Bankman-Fried within weeks of the election, and the crypto exchange pressed the accelerator on its Bahamas’ plans, it is clear that its presence straddles both governments.

Mr Bankman-Fried, meanwhile, issued another mea culpa to FTX’s worldwide staff as he took the blame for its sudden collapse. He also continued to grasp at straws by suggesting there was still a chance “to save the company”, seemingly not recognising that it is out of his hands due to the Bahamian provisional liquidation and Chapter 11 bankruptcy protection proceedings.

Asserting that “potential interest” in providing billions of dollars in financing came in “eight minutes after I signed the Chapter 11 documents”, the FTX co-founder said: “Between those funds, the billions of dollars of collateral the company still held, and the interest we’d received from other parties, I think that we probably could have returned large value to customers and saved the business........

“Maybe there still is a chance to save the company. I believe that there are billions of dollars of genuine interest from new investors that could go to making customers whole. But I can’t promise you that anything will happen because it’s not my choice.”

“I didn’t mean for any of this to happen, and I would give anything to be able to go back and do things over again. You were my family. I’ve lost that, and our old home is an empty warehouse of monitors. When I turn around, there’s no one left to talk to. I disappointed all of you, and when things broke down I failed to communicate. I froze up in the face of pressure and leaks, and the Binance Letter of Intent, and said nothing.”

They think smiling and looking pretty, I mean ugly is a strategy. Fools I pray that this isn't Sandals repeated.

My friend, just you comparing the global FTX debacle to the Sandal's tragedy tells me you're not that worldly.

Google-eyed Kwasi is not a good spokesman for the defense of our nation's financial services sector by any measure. LOL

Kawsi and those FNM members should hang their heads in shame and stop trying to make brownie Points , they would have done the same or worse , they have to be the biggest dummies ever bar none

As should you and the PLP crooks you worship. LOL

THIS NEWS ARTICLE HAS BEEN CENSURED BY READERS FOR VIOLATION OF FREEDOM OF THE PRESS RIGHTS.

And to think The Tribune is trying to squelch the freedom of speech rights of its readers. LMAO