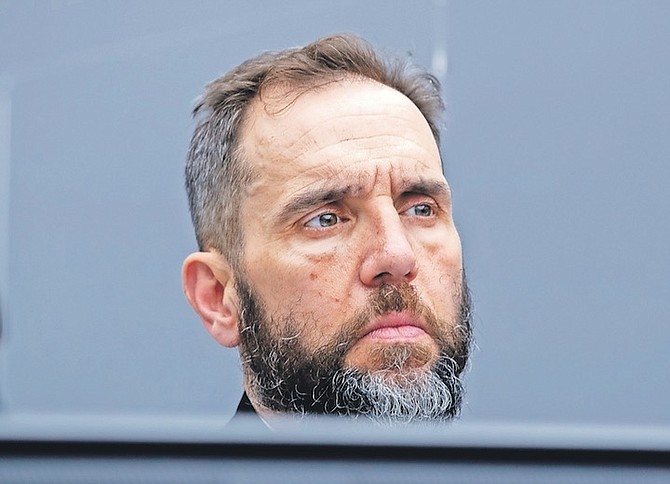 JACK Smith is Elliott Ness. Or is he?

(Incidentally, Lyford Cay’s own Sean Connery won his only competitive Oscar for his memorable supporting role in that same film).

Even before the New York Times’ Maureen Dowd made the Smith- Ness comparison in a column over the weekend, it had occurred to others.

Jack Smith is the career prosecutor tapped by US Attorney General Merrick Garland to oversee two federal investigations of former president Donald Trump, now that Trump has formally launched his bid to become only the second American president to serve two non-consecutive terms in the White House.

But there’s more to the comparison. In some ways, Smith in his new assignment is pursuing someone in Trump whose notoriety and widely presumed culpability on the federal charges he faces is as well known as was Al Capone’s racketeering and corruption. Both men experienced and reportedly enjoyed both tremendous fame and longstanding records of evading the dogged efforts of law enforcement to indict and imprison them for various dramatic offences.

Capone was both feared and idolized by an American public simultaneously impressed and disgusted by his ability to evade police, grand juries and federal agents. He was in the headlines all the time.

For many Americans, this seems like Donald Trump, whose reappearance on Twitter with his 88 million followers now seems to have been enabled by new owner and electric car and space flight mogul Elon Musk.

Now, though, here comes Jack Smith, the reportedly dogged and intrepid federal prosecutor who has just completed a four-year term at the International Court of Justice in the Netherlands, where he pursued international war criminals and was investigating war crimes committed in Kosovo in the wars that followed the breakup of Yugoslavia thirty years ago.

Attorney General Garland announced Smith’s appointment. “The Department of Justice has long recognized that in certain extraordinary cases it is in the public interest to appoint a special prosecutor to independently manage an investigation and prosecution.”

Trump clearly presents an extraordinary case. Appointing a special counsel, Garland said, “underscores the department’s commitment to both independence and accountability in particularly sensitive matters.” As The New Yorker magazine reported on its website, “to have President Biden’s appointees criminally prosecuting former President Trump while they both run for the Oval Office is unprecedented. No such moment has existed before in U.S. history.”

So what will Jack Smith/ Elliott Ness actually do? The newly appointed special counsel will oversee the Justice Department’s investigations into Trump’s conduct leading up to the riot and assault on the U.S. Capitol on January 6, 2021, as well as Trump’s alleged retention of classified documents after leaving office and possible obstruction of the government’s investigation of this.

In a statement late last week, Smith pledged to conduct the investigations “independently and in the best traditions of the Department of Justice.”

“The pace of the investigations will not pause or flag under my watch,” Smith said. “I will exercise independent judgement and will move the investigations forward expeditiously and thoroughly to whatever outcome the facts and the law dictate.” He does sound like Kevin Costner as Elliott Ness. Straight as an arrow.

As Smith’s appointment was announced, Garland became the first senior Justice official to publicly associate Trump with “efforts to interfere with the lawful transfer of power following the 2020 presidential election or the certification of the Electoral College.”

B ut is this going to wind up being another Robert Mueller investigation? Mueller was a widely-respected public official whose appointment just five years ago by Trump’s acting attorney general was intended to facilitate an investigation into Russian interference in the 2016 United States elections, links between associates of Donald Trump and Russian officials, and possible obstruction of justice by Trump and his associates.

We can recall how that all turned out. Remember how Trump’s attorney general, Bill Barr, flim-flammed the public? Before Mueller’s report was even issued in 2019, Barr said: “Deputy Attorney General Rod Rosenstein and I have concluded that the evidence developed during the Special Counsel’s investigation is not sufficient to establish that the President committed an obstruction-of-justice offence.”

After the report was actually released – remember all the fuss about redactions? -- Mueller later demurred, disagreed with Barr in Mueller’s annoyingly understated, measured, lawyerly and ultimately feckless fashion. But the damage by Barr had been done well before Mueller finally summoned the energy and independence to actually comment on his boss’s misleading mendacity.

At the time, Trump crowed: “No collusion. No obstruction. I’m having a good day. There never was, by the way, any collusion or obstruction, and there never will be. And we do have to get to the bottom of these things, I will say. This should never happen to another president again, this hoax, this witch hunt.”

Yesterday, Barr revealed a change of heart. “Trump’s willingness to destroy the party if he does not get his way is not based on principle, but on his own supreme narcissism,” he added. “His egoism makes him unable to think of a political party as anything but an extension of himself — a cult of personality.”

Will Jack Smith get an indictment where Mueller failed? Who knows? It’s abundantly clear that Trump intends to play the victim again, and maybe his popular base of support and the GOP rank and file will buy it again.

Also, there are rumblings already that Smith may not actually be comparable after all to the legend of Elliott Ness. Some pundits have criticized his office’s handling of the alleged misdeeds of former North Carolina senator John Edwards and Virginia governor Bob McDonnell while Smith worked at the Justice Department. More dirt will probably turn up in the days and weeks to come.

Is the US facing another couple of years of endless political in-fighting and needless “investigations?” While Smith tries to do his job in the glare of media klieg lights, what mischief will the Republican-controlled House of Representatives concoct? With characters like Reps. Jim Jordan of Ohio and Marjorie Taylor Greene of Georgia likely to be cable news superstars, will Hunter Biden’s allegedly careless and casual greed and general misbehaviour make headlines all over again?

Yikes. What a prospect!

THIS COLUMNIST'S ARTICLE HAS BEEN CENSURED BY READERS FOR VIOLATION OF FREEDOM OF THE PRESS RIGHTS.

And to think The Tribune is trying to squelch the freedom of speech rights of its readers. LMAO