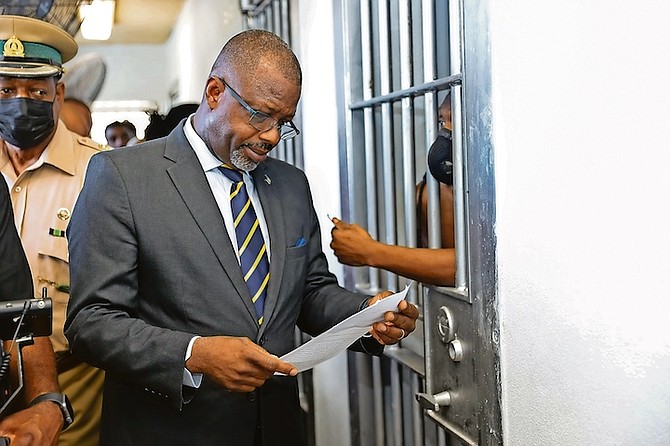 NATIONAL Security Minister Wayne Munroe revealed yesterday that officials are hoping to break ground in the coming weeks on the construction of a new high-medium security correctional facility at the Bahamas Department of Correctional Services.

Mr Munroe said while the target was an ambitious one, the government was committed to doing what was necessary to improve prison conditions for inmates and meet international standards.

The minister spoke to reporters before touring several facilities under renovation at the prison yesterday.

This comes after the American Correctional Association conducted an assessment report of BDCS that highlighted several deficiencies.

“On the wall you will see renderings of the proposed new high medium correctional facility, that if Commissioner Cleare gets his way, we’ll be breaking ground 70 days from the time we were in church celebrating the 70th anniversary of the Bahamas Department of Correctional Services at Faith United Baptist Church,” Mr Munroe also said.

He added: “The 70 days according to my calculation expires the 15th of January 2023. That is ambitious, but this is why you see the whole team here from the Ministry of National Security as our function is to do what is necessary to seek to accomplish the goals that are set up.”

Following his interview with the press, Mr Munroe, along with other prison officials, led the media on a tour of the site where the facility will be constructed.

The new building will be able to accommodate some 820 inmates after completion.

“It would be an area that will encompass the existing virtual court and so the proposal is that that will have to be demolished and the judiciary is asking for a more expansive virtual court,” Mr Munroe added.

“We have virtual courts that deal with remands so that this phenomena of busloads of inmates going down simply to be told, ‘you’re remanded for further weeks.’ That has stopped and so the remand court accommodates that.

“We will trust that the remand court can accommodate some simple trials, particularly in the Family Islands, we have a phenomenon that people are transported to Grand Bahama, say Abaco, Eleuthera, just to be told, ‘we’ll deal with you in another week, another month or two.’

“It’s a wasted trip. It’s wasted manpower and wasted resources. The virtual court will accommodate that as well and realise cost savings, quite apart from the logistics of moving inmates around the Commonwealth of The Bahamas.”

Acting Commissioner of Corrections Doan Cleare said in September the new facility will be completed in the next 17 months.

“The government has already agreed to build a new facility, a new high-medium security prison which is 820 beds,” Mr Cleare said while appearing as a guest on a local radio show.

According to Mr Munroe, costs for the new high-medium correctional facility are still being finalised.

Perhaps we could just remove all of the violent criminals, who have been found guilty, from this earth? That should make plenty or room. Why the need to house rapists and murderers and attempted murderers. They are sick animals who should be put down for the orderly running of a country. Their cadavers can be used by medical students and maybe we can learn something about their brains that made them so disgusting.

I feel it makes more sense to take them to an uninhabited island and let them assist in building a new facility. Bring to them some kind of manufacturing. Whether it be license plates, furniture, whatever it may be.

Please hurry up, please no lip service, let's make some space for those who need ankle bracelets and can't behave.