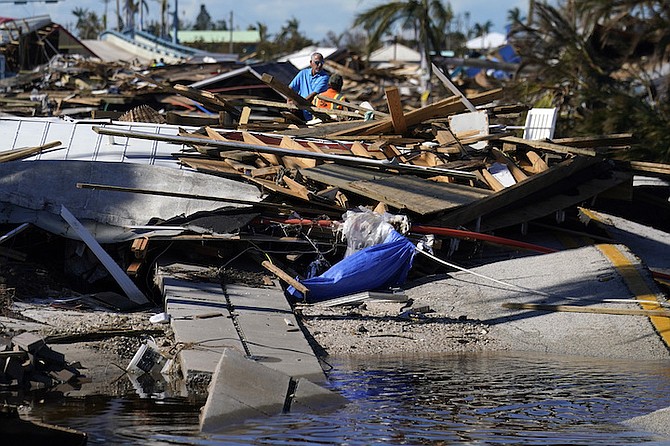 Responders from the de Moya Group survey damage to the bridge leading to Pine Island, to start building temporary access to the island in the aftermath of Hurricane Ian in Matlacha, Fla., Sunday. (AP Photo/Gerald Herbert)

Bahamian property owners were yesterday warned to brace for further insurance hikes with one underwriter revealing Hurricane Ian’s multi-billion dollar devastation brought back memories of market conditions from 30 years ago.

Timothy Ingraham, Summit Insurance Company’s managing director, told Tribune Business the storm was set to “make a bad situation even worse” given the losses it has inflicted on the already-struggling global reinsurance market which Bahamian carriers rely upon to underwrite all insured risks in this nation.

Predicting that reinsurance conditions will now get “even hotter”, he disclosed that the current situation brought back memories of Hurricane Andrew’s aftermath in 1992. The latter, a Category Five storm that struck the northern Bahamas before wreaking havoc on south Florida, sparked a major reduction in market capacity - leading to major premium price increases for Bahamian property - as reinsurers withdrew their willingness to underwrite risks in this nation.

While Bahamian consumers are unlikely to suffer a similar surge in insurance costs now, Mr Ingraham warned reduced market capacity could be an issue if local carriers’ reinsurance partners pull back on their exposure to this nation in Ian’s aftermath.

And he was backed by Tom Duff, Insurance Company of The Bahamas (ICB) general manager, who revealed that “we were already bracing for a significant increase in property catastrophe costs” before Ian’s arrival in Florida and the Carolinas.

Both insurance chiefs said it was too early to determine the precise impact that Ian’s multi-billion dollar payouts will have for Bahamian premium costs as negotiations with reinsurers over treaty renewals are just beginning. Each pledged that the local industry would do its utmost to minimise any increases given fears that coverage is becoming increasingly unaffordable for both homeowners and businesses in an economy grappling with both inflation and COVID’s fall-out.

The 2022 hurricane season still has almost two months to go, and the US is still counting Ian’s costs. Initial estimates suggest that, adjusted for inflation, the storm may be the second costliest to ever strike Florida after’s Andrew. A research firm, CoreLogic, forecast there could be up to $47bn in insured losses, while other estimates yesterday placed the total bill as high as $60bn-$70bn.

Reinsurers tend to lump The Bahamas in with Florida when calculating their prices, so Ian’s devastation will have consequences for all local property owners. Bahamian property and casualty insurers, due to their relatively thin capital bases, have to purchase huge amounts of reinsurance annually to underwrite the majority of the hurricane risks faced by this nation’s real estate assets.

As a result, Bahamian insurance premiums are largely dictated by global reinsurers when it comes to price, and the losses they suffer from hurricanes and other catastrophes. “It’s too early to say definitively, but what I could say definitively is that it won’t help,” Mr Ingraham told Tribune Business of Ian’s impact.

“It’s going to make a bad situation in the reinsurance market even worse than it already is... We’re already in what everyone feels is a hot market, and we feel like it’s going to get even hotter.” Even prior to Ian, Mr Ingraham said US-based reinsurers had been seeking an extra $20bn in capital support to further buttress the $200bn already in the sector’s possession.

“It was already looking difficult, if not impossible, to obtain. Ian will not make it easier; it’s likely to make it worse,” the Summit chief added. Meanwhile, the US dollar’s appreciation against both the UK pound sterling and the euro was bad news for European reinsurers, as it meant the dollar value of exposures in The Bahamas and elsewhere that they are carrying on their books has increased.

Inflation has also prompted many businesses and homeowners to increase the sums insured under their policies, due to higher reconstruction costs, further increasing the burden on reinsurers. Falling stock markets, and rising interest rates globally, have also impacted the industry leading to concerns about its capacity and ability/willingness to take on and underwrite risks in areas prone to natural disasters such as hurricanes.

Mr Ingraham, who said between six to ten Florida insurers had “gone out of business” prior to Ian because they were unable to obtain sufficient reinsurance, said: “For those of us old enough to remember, post-Andrew we got into a period where finding sufficient capacity was a challenge.

“Finding enough capacity to ensure everyone who wanted to have insurance was a problem, and the rates at which we found that capacity was a problem. Some of us remember back to Andrew, and this certainly brings backs memories of it.”

He added that the true impact on Bahamian insurance prices, and availability, will not be determined until local carriers complete renegotiation of their reinsurance treaties. “We’ll obviously try to hold the line as much as possible given that we’ve had some increases in recent years,” Mr Ingraham told Tribune Business.

“There’s no guarantee that will happen but, certainly from our perspective, we’d like to see extra capacity in the market where we can cover every client who comes to us. We’d like to do that at a reasonable rate, but supply and demand dictates things. When you have a loss of capacity coupled with rising demand it may not be possible to hold off on price increases if reinsurance costs are going up.

“It wouldn’t surprise me to see that as much as I don’t like increasing prices because we understand the implications of it. But, to a certain extent, it’s out of our hands,” the Summit chief continued. “I don’t think we’ll see the level of price increases we saw post-Andrew. In terms of capacity, it depends on the reinsurers. If this year’s losses are within what they expected, we will probably not get to post-Andrew.

“The local insurers will do their best to make sure they provide clients with the cover they need at a price as reasonable as they can possibly get them. I’m sure, like us, my competitors will do our best to contain any increases to a minimum.”

Mr Duff echoed his colleague’s assessment. “Put it this way: It’s not going to help us in any way in the marketplace,” the ICB chief said of Ian’s fall-out, “because we were already anticipating a significant increase in property catastrophe costs this year. Obviously a major loss like Hurricane Ian is only going to exacerbate the problem, but it’s too early to say exactly what the impact will be.

“There clearly will be an impact. Ian just complicates matters for us, and we’ll have to see how things pan out. Things will become a lot clearer in the next month or two when we’ll have a much better feel. That’s all I can say. Even before Hurricane Ian had struck Florida we were kind of bracing ourselves for increased catastrophe costs anyway because the cost of capital was increasing” for reinsurers.

Rising global interest rates are enticing the hedge funds that finance reinsurers to invest their assets in more conservative assets that are now yielding higher returns, further reducing market capacity. “For all these reasons we were anticipating a difficult renewal season, and Hurricane Ian just exacerbates these problems,” Mr Duff said.

With hurricanes increasing in frequency and intensity due to climate change, Bahamian homeowners and businesses are finding that the cost associated with protecting their most important investment - their real estate assets - is becoming prohibitively expensive with coverage priced further and further beyond their reach.

“We’ve always got to try and get the message across to customers that it may feel like a good economy in which to cut back on your catastrophe cover, but at the end of the day it can go catastrophically wrong if you get it wrong and be a life-changing event,” Mr Duff told Tribune Business.

“We always try and persuade customers of the merits of covering their property for catastrophe perils. It’s always difficult against a background of a struggling economy with people getting back on their feet following Dorian, following COVID. It’s still a difficult time for many. The extra challenge of having to meet higher reinsurance costs is obviously something we have to be mindful of but it has to be done.”

In 10 years only the extremely wealthy will have insurance coverage.

The Gov't had better make a plan NOW to assist the poor and the dozen or so middle class people that will need help getting insurance coverage in 10 years.

Need to stop all insurance companies. They are a bunch of overpriced jokers.

Maybe the government should look into stockpiling some temporary housing, I don't know something like a Dome or something.

We could go 100 years without a major hurricane and these insatiably greedy property insurers and their reinsurers, both in the Bahamas and abroad, would never ever entertain the idea of lowing the exorbitant hurricane insurance premiums they now charge us.

An insurance license is a license to steal with the blessing of government regulators. These insurers are all too quick to pocket your premium payments and then deny or give you a most difficult time (even force you to hire a costly lawyer) when you make a claim in your time of great need. They prey on your fear to collect their premiums and then turn their back on you when you make a claim.

And these greedy vultures even get the better of the bank that holds the mortgage on your property by having the premiums tacked on to your mortgage loan, often in exchange for a hidden commission fee as compensation for the additional credit risk taken on by your bank.

how about them nice profits though

The Government needs to allow trailer homes into the country.

Not too many hurricane proof trailer homes and RVs to choose from that come available with the submarine convertibility feature. LOL