PETER YOUNG: New British PM will have to do better than this 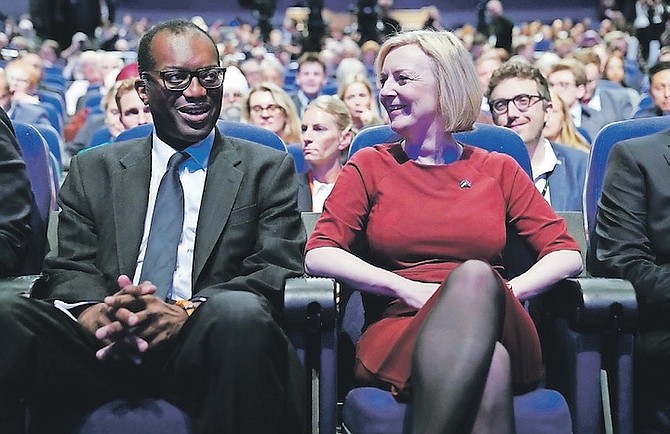 Having commented last week that the new British Prime Minister, Liz Truss had made a good start, only days later the picture has changed dramatically.

In charge for barely a month, she and her Chancellor of the Exchequer, Kwasi Kwarteng have created economic and political mayhem through an emergency mini-budget unveiling sweeping tax cuts and plans to boost economic growth. This was preceded by a hugely expensive package to cap typical energy bills which the government claimed was a major undertaking that needed to be pushed through quickly.

The tax reductions included the reversal of a rise in National Insurance and abolition of corporation tax rises and of the higher rate of peronal income of 45 percent tax that would have given money back to the wealthiest. The mini-budget attracted a fierce hostile reaction because it did not contain an assessment by the UK’s Office for Budget Responsibility (OBR), the body that examines the government’s tax and spending plans. Nor did the government say how these cuts would be paid for and produce a plan for managing the inevitable debt.

Policy analysts criticised the lack of information and assessment and there was turmoil in the financial markets which, it is said, detest the notion of countries spending and borrowing at high levels without spelling out in detail how this will be done. Doubts were raised about the sustainability of the proposals and, in particular, how the debt would be serviced.

There was also a negative response from the IMF which issued the sort of warning normally reserved for emerging markets. The result was a collapse in confidence and a historic drop in the pound sterling against the US dollar though it has subsequently bounced back to pre-mini-budget levels; not least, apparently, in the knowledge the Bank of England will have to ratchet up interest rates to support the currency and put a lid on inflation.

All this, of course, has meant instead of taking the stage in triumph at the Conservative Party conference this week, Ms Truss is facing a rough ride. There have been serious political consequences in the short-term. The heavy criticism and turbulence in the markets, with the Bank of England having to pump billions into buying up government debt, have contributed to the opposition Labour Party’s huge lead over the Tories in the polls - to the extent that, if an election were held tomorrow, Labour would probably win by a landslide.

However, the PM made clear over the weekend the government had no intention of backtracking. Indeed, she has doubled down on her economic strategy but has admitted she and the Chancellor should have laid the ground better before announcing their tax-cutting policy and that she had learnt lessons from the fierce reaction. She stressed it was now important to regain the confidence of the markets and restore stability and her government’s credibility for sound economic management. So, it is significant that subsequently the Chancellor announced the abolition of the 45 per cent higher tax rate would be reversed on the grounds that it was drowning good aspects of the plan.

Nonetheless, the Tory government’s reputation has been badly damaged. Observers are saying the Chancellor could have averted chaos if he had stuck to assistance with energy bills, the reversal of National Insurance increases and cancellation of corporation tax rises. Reportedly, he now accepts he should have laid more emphasis on spending restraint and ought to have obtained, in advance, an economic forecast from the OBR.

Clearly, the PM and her Chancellor mishandled the execution of their plan by failing to explain plausibly how the government would pay for the tax cuts.

Their perceived recklessness spooked the financial markets, while scrapping the 45 percent higher income tax band gave the undesirable impression that the government was favouring the rich. Such misjudgements have been a gift to Labour which has been painting the Tories as irresponsible, incompetent and biased towards the wealthy.

The next step is publication of the government’s medium-term fiscal plan, with an OBR forecast, on November 23. The idea is to put the UK on course for lower taxes, creation of higher growth, greater productivity and innovation and supply-side reform. To many people, that sounds like libertarianism writ large – the philosophy which, inter alia, holds that the way to achieve economic growth is to reduce the size of government and its spending and taxing while deregulating the market process and restoring to individuals the right to make the important decisions in their lives.

While awaiting further details of the plan, some are now saying, if the issue is not handled properly from now on, all this is sufficiently serious to produce a sea change in UK politics that could even lead to a collapse of the new Conservative government. 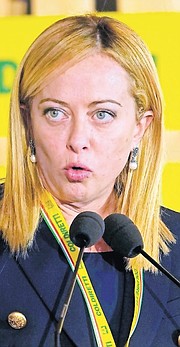 Alarm in Europe at far-right victory in Italy

By all accounts this is a critical time for Europe. The war in Ukraine and spiralling energy costs - caused in part by its own European Union sanctions against Russia - are contributing to increased inflation and an acute cost of living crisis across the continent, and there is a danger of energy shortages during the coming winter. But, to make matters worse, it is now faced with a new threat that could alter the balance of power within the EU.

In last week’s general election in Italy, a right-wing alliance has emerged as the winner and will form the most right leaning Italian government since the Second World War.

Giorgia Meloni, the leader of the Brothers of Italy party (FdI), which took 44 percent of the vote, will become the country’s first woman Prime Minister when she is asked by Italy’s President later this month to form a government. By coincidence, she will take office on the centenary of the coup that brought the fascist leader, Benito Mussolini, to power in 1922. The FdI is said to be rooted in a post-war movement which arose out of Mussolini’s rule, but Meloni says firmly that she and her party have turned away from fascism. Nonetheless, although anticipated in the polls, her victory is sending shock waves through Europe.

There have been differing reactions to this far-right victory – from jubilation by Eurosceptic parties to extreme concern by EU leaders worried about a threatened change in the balance of power in Europe. For them, it has been described as a ‘nightmare scenario’. Italy’s current Prime Minister, Mario Draghi, helped to bolster his country’s prominence and influence in the EU, of which the nation was a founding member. As Europe’s third-largest economy with an established history of involvement in the bloc, Italy has also supported its closer integration.

Now, Meloni’s right-wing alliance has reignited fears in Brussels about the build-up of a nationalist front in Europe, with the success of the far-right Sweden Democrats in last month’s elections and the advance of Marine Le Pen’s National Rally party in France as well as governments in Hungary and Poland which are in danger of changing into illiberal democracies.

According to reports, Meloni is deeply Eurosceptic. But she has stressed she is not calling for Italy to leave the euro as its currency or the EU altogether. She is an ardent nationalist and is likely to march in step with Hungary and Poland on issues like immigration. She has also emphasized her support for Ukraine. But, apparently, she sees herself as an Atlanticist as well. She has been called a hard-edged firebrand though also a measured conservative politician in favour of family values who appeals to mainstream voters, and she supports some form of welfare for those in genuine need.

It seems that many people are impressed with her political style and by the fact that she knows how to talk to ordinary people. At the same time, she is a political pragmatist who understands that her country has huge public debt -- together with an elderly population and big pension liabilities -- and needs fiscal discipline while also welcoming the anticipated COVID-19 post-pandemic funding from the EU. She claims there is a pressing need to get Italy back on its feet and to revive its spluttering fortunes after 30 years of stagnation.

Interestingly, commentators have unearthed a raucous speech Meloni made earlier this year that summed up her overall approach, the key elements of which were: ‘yes to natural family; no to LGBT lobby; yes to sexual identity; no to gender ideology; no to Islamist violence; yes to secure borders; no to mass migration; no to big international finance and no to the bureaucrats of Brussels.’

After hearing all that, perhaps there is little wonder Brussels fears the worst. Moreover, her rhetorical insistence on identifying and pursuing Italy’s national interest is at odds with the notion of European integration. That said, there seems to be a growing acceptance that at the moment the EU’s primary concern is to survive the tough winter ahead in the face of an economic downturn and energy shortages that could lead to social unrest. In particular, high energy prices, precipitated by the war in Ukraine, have increased pressure on governments across Europe to cushion the blow to consumers and businesses.

Some observers are now saying in such circumstances there is no space for EU grand designs about ever closer political union. In the view of many, that is a battle which Brussels may have already lost, since increasingly there appears to be a push towards a so-called ‘sovereignist’ Europe which rejects supranational oversight and seeks to restore powers to individual states. Be that as it may, of more immediate concern to Paris, Berlin and the European Commission is the danger of far-right successes in Sweden and Italy leading to a ‘populist front’ within the EU that could even block EU decision-making.

Memories of expulsion of Ugandan Asians

Fifty years ago - on September 18, 1972 - the first evacuation flight of Asians expelled by the President of Uganda, Idi Amin, arrived in the UK. In August, he had given some 60,000 Asians resident in Uganda 90 days’ notice to leave the country. Nearly half of them were admitted to the UK and settled there.

In justifying his action, Amin, who was Uganda’s third President and was in office from 1971-79, accused Asians of ‘economic sabotage and corruption, ethnic insularity and disloyalty’ - all of which was vigorously disputed by Indian leaders. He also vowed to ‘give Uganda back to ethnic Ugandans’. Amin later became notorious as a brutal dictator who harassed and murdered large numbers of his own people.

Ultimately, some 28,000 Ugandan Asians settled in Britain, the largest group of refugees ever to be accepted there. The then Prime Minister, Edward Heath, set up a Uganda Resettlement Board to coordinate action to find accommodation for those unable to make their own private arrangements and to help the refugees to find jobs. Volunteer groups and charities also provided assistance and support.

By the time of this 50th anniversary, the clear evidence is many of the refugees and their descendants have excelled in various fields – from business and finance to politics, science and the arts. There have been a number of commemorative events to mark the anniversary together with expressions of gratitude and appreciation. For example, the Ugandan-born chair of trustees of the British Asian Trust, Lord Gadhia, has publicly praised the ‘generosity of spirit of the British people in welcoming them’ and said ‘this was a moment to express our community’s eternal gratitude to all those who supported us in our hour of need’.

How pleasant it is, amid all the horrors in the modern world, to write about this today. Despite the original misery of expulsions on such a large scale, it is ultimately a satisfying and encouraging story to tell -- for once, some good news!