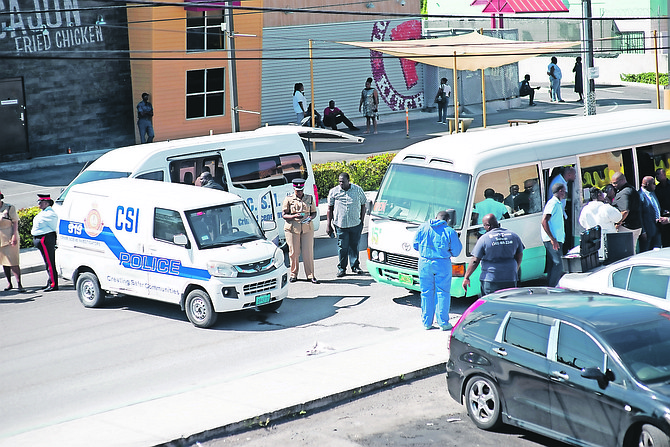 A BUS driver was killed and a 16-year-old boy was injured during a brazen daylight shooting on a public jitney yesterday.

The double shooting occurred at Florida Court and Robinson Road, while the 15A bus was on its route.

Chief Superintendent Chrislyn Skippings said shortly before 10am, as a male passenger got off the 15A bus, he approached the 32-year-old driver and fired a shot which killed him. A teenager, who was a passenger on the bus, was also shot and taken to hospital for his gunshot injuries.

The bus driver was on bail for murder and attempted murder, The Tribune understands.

CSP Skippings urged members of the public who may have seen a vehicle leaving the area at high speed or a suspect that may have got off the bus to contact the police.

“I also take this time, again, to speak to parents and family members who know that their families are in possession of weapons. I asked you to reach out to your police department, provide us with the information. Let’s get these weapons off the streets. These weapons, yeah, they are intended for other persons. But again, I reiterate, those weapons can actually be used on you or your family members,” she added.

It was reported there were other passengers on the bus at the time however there were no other reports of injuries.

As CSP Skippings spoke to reporters, screams from the deceased’s family echoed in the background.

Loved ones of the deceased were inconsolable at the murder scene, as they mourned the lost life of the bus driver.

Some bystanders crowded the area as well trying to figure out how the brazen daylight shooting even happened.

When asked if this incident raised a concern to officers to increase their patrol, especially on bus routes, CSP Skippings said, “We are definitely concerned about it. But yet again, it speaks to individuals and it speaks to family. You hear me keep saying that. When that individual left home or when he left a residence, somebody knew he had a weapon. The right thing to do would be to contact the police to save a life. We are concerned about it. We do have saturated patrols.”

This is the country’s 104th murder for the year according to this newspaper’s records and the third murder in less than a week.

EMS personnel arrived at the scene and confirmed there were no signs of life.

Anyone with information on these incidents is asked to call police at 502-9991 or Crime Stoppers at 328-TIPS.

The killings will not stop or slow down until the flow of guns into the country is stopped. We need the FBI to come in, Finding a gun in Nassau is as easy as finding a church, a bar, or a webshop.

The illegal gun, human trafficking and drug trades have very powerful and wealthy representatives in our region and even within our very own country. And most of the 'big time' racketeering criminals in our country are well known to both law enforcement officials and the corrupt ruling political class that has run our country into the ground.

The US act on their own motives, when they find one more sinister than what you want them for they will come but it will have nothing to do with why you asked them to come. You folks just don’t get it.

What's with the bus driver being out on BAIL for MURDER and ATTEMPTED MURDER? MUST we do everything like the US of A? Look what's happened to them!