PM to meet with retailers next week 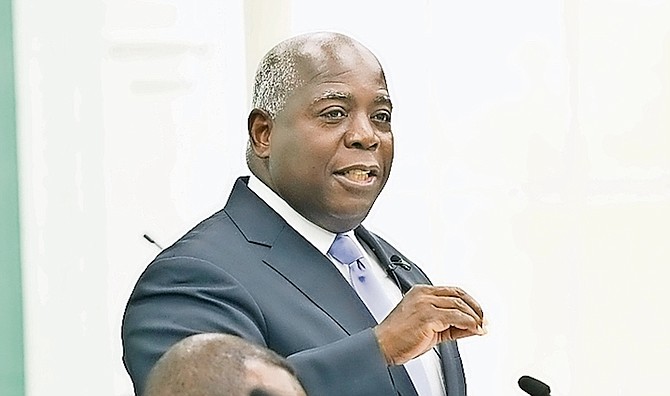 The announcement comes after reports that food stores throughout the country were said to be “up in arms” over the details of the government’s expanded price control regime amid fears it will “devastate” the industry and jobs for hundreds of workers.

Mr Watson also responded to calls from prominent grocer Rupert Roberts that price controls be done away with, saying: “We are protecting our Bahamian people that’s why we have the consumer protection agency.”

He further acknowledged that there were some concerns on social media that retailers planned to take action over the government’s decision.

“They're threatening to hold some items from the shelves that might be costly. We've heard some people say they may close on weekends on Sundays. There is a meeting with the Prime Minister and the retailers next week. I think it's Tuesday that they have planned to have that meeting,” Mr Watson told reporters during a press briefing at the Office of the Prime Minister.

He said the prime minister will talk to the retailers and one of the things he will convey to them is his administration wants to provide an environment where retailers can thrive, but also where consumers and Bahamians can not only thrive but survive.

“Food services, access to food is important for our people and so there must be a way to be able to manage how we're able to ensure that people can afford to go to the grocery store and purchase goods so that you can have food for them and their families - that’s important.

“But what (the) prime minister has done through his administration is put relief in place for retailers and wholesalers. There has been a reduction on customs imports and duties on food specifically so that these retailers and wholesalers can feel some relief themselves and the consumers hopefully will be passed on that relief. That's just one initiative to allow there to be some balancing of what we've seen happen with inflation.”

Mr Watson went further to express officials’ position on the price control commission, adding they are protecting Bahamians when he was asked about calls to do away with price control.

“And so people are naturally looking at their bottom line and see even in inflation how can we still stay afloat and still make a profit. We’re not knocking them for that. That’s their job. The job of the government is to protect its people and those measures are put in place to be able to impact people in a positive direction. So, there are also going to be times and seasons where people are going to push a little more. Remember the gas wholesalers did the same thing when gas prices were rising.

“They were pushing and agitating for (the) government to give them a little more room and (the) government said listen, where you work with us we will give you some relief in other areas, but we're not going to put this on the backs of Bahamians. What happened eventually, it balanced out and that's what you call good governance.

“Rather than just saying the lazy, lazy way out is increased taxes, we're not going to do that. We're going to find a way that you always benefit people,” Mr Watson said.

Ok its really clear now that this was a PR move and no real economic analysis was done. Just a day ago the PM said he wasnt concerned about a major impact on businesses.

Economics is all about how other things are impacted when you do one thing. Heard the question asked multiple times the morning after the speech, "why are people upset", you only ask that question if you have blinders on and no analytical bones in your body.

A major hotel said 2/3 of their staff are minimum wage but they shouldnt feel much impact, we'll see if that proves true. Roberts said he'll feel zero impact, we'll find out in the pricing. I doubt the govt even went as far as calculating the cost to businesses just using something as basic as national insurance data. That would have given them a fairly good estimate across the landscape.

The increase isnt a bad thing, the bad thing is that they didnt analyze the knock on effects of the increase and whether those things were an acceptable trade off

The next thing is, is the chamber representing all of the business community? Or rather who's interests are they representing? because they came out with a very tepid response this week while this story talks about retailers taking protest action

Some of the additional items do not need to ne price controlled. Take bananas, it is abundantly cheap and even rotten ones can be bought to make bread, if you control the price, merchants will stop buying.

Notice they increased the margins on eggs from 10% to 25%, just as the price of eggs are very high. I wish luck to merchants increasing egg prices as I have seen people grumbling in the stores over egg prices.

Some prices are there for optics, white potaros go for 4 dollars for a 5lb bag, why control the price? OTOH, the sweet potatoes are 3 dollars for 1 pound, and that is not controlled.

I could understand baloney being price cobtrolled, but not all "sandwich meat". Let the merchant make a killing on prosciutto , fresh market is selling at discount as even the rich ones cannot bear the price.

Youre basically concluding as I did thst there doesnt seem to be any economic analysis on these decisions, its ZPR. PR is fine but it wont do you any good if its substanceless

Price controls were phased out decades ago. Except in Cuba and this country.

However, inflation was self inflicted after the pandemic and demagogues all over are bringing it back. So they decided to add more.

The grocers handle the existing list through loss leaders business methods, and cannot add these things in 4 days.

Folks who eat from breadbasket will not benefit from the new price control. They eat mackerel, not butterball sluiced turkey sandwich meat.

The public are the best price controllers. Have you noticed no one is buying 6 dollar eggs?

Even bakers can let go of eggs. There are things such as egg less bread and cakes.

People are not stupid.

Davis wants to sweet talk and bully these businesses for his political benefit, but it's not going to work.

People are on to his lies and gimmicks

Cruel Davis's press secretary said: “We are protecting our Bahamian people that’s why we have the consumer protection agency.”

That statement made on behalf of Cruel Davis is really one big sick joke when you consider successive corrupt and grossly incompetent governments, like the current Cruel Davis-led PLP government, have brought most Bahamian people to their knees, suffering like they have never suffered before.

With 95% of Venezuela's population now living in abject poverty of the worst possible kind, most Bahamians would find the average Venezuelan's weight loss and decline in life expectancy over the last 20 years to be absolutely horrifying. Yet that is the very same future that the IMF and World Bank, and their fellow proxy organizations like the IDB and Moody's, have planned for The Bahamas and the Bahamian people.

And while an ever increasing number of elderly and young Bahamians find they must go to bed at night feeling dreadful pangs of hunger, the waist-lines of many among the corrupt political ruling class continue to grow with the growth in roly-poly Davis's own waist-line being a shining example of that most cruel fact.

Squaring the circle, just helpless PR stunt. Of course prices go up and price controlled goods will disappear and be replaced by other double price. It’s a New Day of BS. But apparently working…

If any of you believe that the retailers are the real problem, that the government is your friend and this friend is working out everything to your benefit, then you are not thinking. Why would any politician help you when they are all partners in every part of the money making schemes in this nation? Why would it bother them to collect more profits for their troubles? The wants, needs, suffering, and fears of the dependent, deprived and needy are designed to work out to their benefits.

I am from the government, and I am here to help... Wait, stop, why are you'll running away???