INSIGHT: Don’t keep your partners in the dark 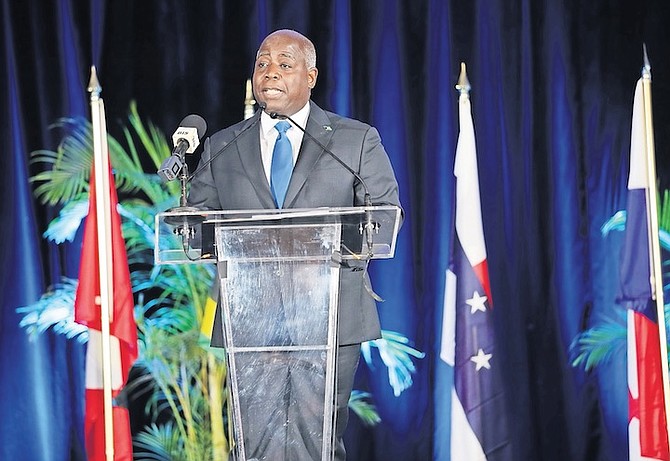 PRIME Minister Philip “Brave” Davis appealed to retailers to “partner” with him “to bring relief to our people” amid a dispute with grocers over new price controls.

AMID a falling-out between government and retailers, Prime Minister Philip “Brave” Davis offered a rallying cry for grocers to “partner with me”.

He said: “I’m looking for them to partner with me to bring relief to our people.”

The row came of course after the Prime Minister announced in his national address that there would be a whole new raft of price controls introduced – on 38 new items.

Those items include such items as chicken, eggs, bananas, apples, bread, onions, potatoes and more.

Mr Davis went on: “The government has been carrying a lot to ensure that not much burden is on them (grocers) and we’re looking for people to partner with us – wholesalers – and I trust I’ll be able to persuade them to understand what is happening and why we need to do what we’re going to do.”

As for Mr Davis’ would-be partners, the Retail Grocers Association of The Bahamas warned that the measures, if brought in as planned, could lead to layoffs and store closures – and argued that the price controls are not on 38 items, but on 38 categories of items.

They said that would result in 40 to 60 percent of their business coming under price control regulation.

The trouble with Mr Davis’ call for retailers to work with him as partners, of course, is that you don’t introduce a swathe of new regulations without telling the people on your side.

There seems to have been precious little consultation before the fact – leading to last week’s lengthy discussions.

To everyone’s credit, those discussions seem to have been going on in good faith, leading to an extension until this coming Friday for the implementation of those price controls.

At a press conference on Friday, director of communications Latrae Rahming said: “The government realises and recognises that we share the burden with all of our partners in this effort, in the fight against the global economic crisis. So, they will get an extension to next week Friday.”

This overshoots the original deadline of October 21 that Economic Affairs Minister Michael Halkitis had originally hoped everything would be settled by.

Philip Beneby, of the Retail Grocers Association, has said of that deadline they were “trying like hell” to meet it.

Still, as much as the efforts after the fact seem to have been earnest and genuine all round, surely consultation beforehand would have made a good deal more sense.

Indeed, if retailers are supposed to partner with government, not just consultation but the language used by the government seemed to be strange at times.

The government press secretary, Clint Watson, not content with alienating advocacy groups with his comments on marital rape, also managed to agitate retailers in August when he accused some merchants of not passing on Budget tariff cuts to consumers via reduced prices.

Without providing names or evidence, Calamity Clint said the sector has “a responsibility to pass that relief on”. In response, Mr Beneby said “there’s no question” those cuts had been passed on, while Super Value’s Rupert Roberts said his chain’s computer systems automatically passed those savings on in the final prices, adding: “They can’t point the finger at us.”

Mr Watson seemed to drop any further pursuit of such allegations – which makes one wonder why he made them in the first place.

It’s a funny old way to treat your would-be partners. Make accusations against them. Keep them in the dark and surprise them with changes that have a widespread impact. Negotiate after the fact rather than consult beforehand.

Still, focusing on the positive, it’s good to see some understanding of the situation retailers find themselves in, and flexibility in trying to find the best solution – even if it’s to a problem of the government’s own making.

One does wonder how much of this could have been avoided had the government left breadbasket items as VAT-free, but that, of course, was one of their big changes, and backtracking would have been seen as admitting defeat to pressure from the FNM.

Instead, we have all these extra price controls – which presumably will mean an extra workload for the inspectors and extra recruitment of price controllers to keep an eye on everything, bringing with it a higher salary bill for the government.

We will see on Friday if a resolution has been reached – but it’s hard to shake the feeling this could all have been handled better with improved communication and, that most elusive of words for every administration, transparency.

Will the government learn from this for the next time? We can only hope.