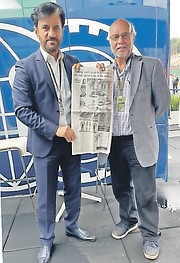 FIA president Mohammed ben Sulayem makes personal commitment to bring karting home to Nassau where it started in 1959. He is pictured with David McLaughlin. 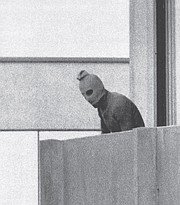 ONE of the terrorists during the Munich Massacre. 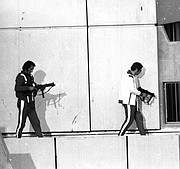 FOR a little country, The Bahamas makes a big splash. Not perhaps in the way you are thinking – as a standard bearer in tourism or an incessant voice in moving climate change issues up the ladder of priorities, not even as a real estate hotspot that keeps getting hotter the worse things get anywhere else in the world.

All those things and more are true, The Bahamas does stand out. We probably grab more headline ink than a little country with less population than the city of Fort Lauderdale would appear to deserve.

But there is a reason. The place is never boring and we always seem to have a connection with something trending or troubling elsewhere. Here are a few moments from this week alone that reminded me of the almost bizarre-like prominence of this little string of sun-kissed islands.

On Thursday, the phone rang. It was Mike Sands (as in BAAAs Mike Sands). Is it urgent? I asked. I’m on a zoom call. “Yes,” he said. “I’m on the phone with the Irish press and they need the name of the survivor of the Munich Massacre and I told them there was only one person I could call in all the world who would know it.”

How quickly we forget, not the massacre itself but the Bahamian Olympic team’s role in saving the few survivors, including Alon who never knew who it was who saved him until one night in 2015 when he was speaking in Nassau. He told of the gunshots, the screams, the terror, the narrow escape, jumping a fence in the pitch black of night, of pounding on a door in the Olympic village, being let in and at first, not understood, then hidden - at great risk to those who did so.

He told of going to the Olympics hoping to take home medals in fencing, instead taking home the bodies of nine teammates in coffins. He did not know who saved him until that moment 33 years later at a speaking event at the Melia when as emcee, I choked back tears, took the microphone and said, “Mr. Alon, the men who saved you that night in 1972 are in the front row. They were the Bahamian team and they are here tonight.”

Sands came up on stage along with Dr Timothy Barrett. The audience cried and laughed and clapped and rose to their feet.

It is little wonder that The Bahamas grabs the headlines it does. It isn’t just a place. It’s the Bahamian people.

It was a week filled with reminders.

A day after the call about the September 5 massacre at Munich by Palestinians, the whatsapp on my phone is blowing up. It’s Bahamas Speed Week Revival organiser and former race car driver David McLaughlin sending photo after photo of famous race car drivers at the Formula 1 Grand Prix in Belgium holding last week’s Tribune with a column on karting in The Bahamas. In interviews, they are talking about the importance of karting, the famed two-time F1 World Champion and Indy 500 winner Emerson Fittipaldi calling Karting “the best exercise, the best training you can get” for F1. Long-time champion Lewis Hamilton started in karting.

The Bahamas is where karting competition began, the first championships were held on a course at Oakes Field in 1959 and now more than six decades later, Mohammed Ben Sulayem the president of the FIA, the governing body of all motor sport, tells McLaughlin he is making a personal commitment to “bring karting home”. 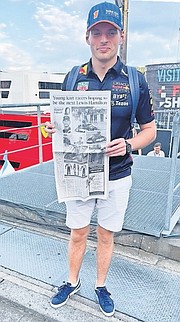 How many other reminders were there this week, tributes to Dorian victims still reeling in the tragedy that forever changed their worlds, a tribute to Shirley Bass Hall who gave us so much and left the stage of life too soon. There were the remarkable performances by Shaunae Miller-Uibo and Steve Gardiner at NACAC and meantime, the Royal Bahamas Police Force got a large cake from the group of youngsters they helped during the karting camp. Thank you, it said, with strawberries and candies around the edges and a marzipan image of two karts. It’s not often the police get a thank you cake from a group of teens, but then, as we said in the beginning, this is an amazing place.

Current Formula 1 world champion Max Verstappen, in Belgium for the Formula 1 Grand Prix, holds a copy of the August 16 Tribune with a full page on karting. And, says the man they call the Boy from Brazil, the one and only, the 2-time Formula 1 World Champion, Indy 500 winner, Emerson Fittipaldi, go karting is the best exercise before Formula 1 and for motor sport.

A MEMORY OF DIANA FOUND IN NASSAU

WITH attention once again on Princess Diana on the 25th anniversary of her tragic death this week, it was a surprise to find a rare piece of memorabilia in Nassau. I happened upon it when I wandered into the most fascinating store in Nassau, A Baker & Sons. There on the overcrowded shelves of the packed floor to ceiling shop on the southeast corner of Bay and Frederick Street was a photo of the young prince and his about to be bride.

The hardback cover book name simply Royal Wedding published in 1981 was filled with rich, full-colour images. It stood out from its place on the shelves, squeezed in behind a colourful array of tiny children’s shoes and in front of dozens of plastic containers filled to the brim with everything from cotton undershirts to caps and long johns. There is no other store like A Baker & Sons, thankfully caught in a time warp when life was simpler, needs for “dry goods” were clearly defined and the Royal Wedding lifted spirits around the world regardless of how you felt about the monarchy.

I didn't know that Bahamians had a role in the Munich Massacre and saving the lives of the athletes. So proud of them.