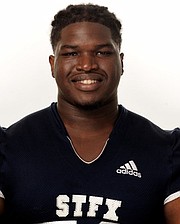 STEPHEN Sears Jr and his St Francis Xavier X-Men are off to an impressive start this season and are now nationally ranked in Canada’s U Sports poll.

The No. 6 ranked X-Men improved to 2-0 on the season with a 24-10 victory over the Acadia Axemen, September 10 at STFX Stadium.

They began the season with a 25-12 win over the Saint Mary’s Huskies in week one. “The season is going great so far. Two big wins to start off. We play Bishops (1-1) this weekend on the road so hopefully we continue the success,” Sears said.

“Our running game is solid and passing is coming along on offence. Our defence has been holding it down. Right now I’m dressing but still second string. Still putting in that work and staying ready.”

Sears is the latest collegiate football prospect to follow the pipeline from The Bahamas to playing the game at the highest level in Canada.

He committed to the X-Men of the Atlantic University Sport Conference following his standout tenure with the Holland College Hurricanes.

Sears was named the Hurricanes’ 2021 Offensive Lineman of the Year when the team announced its annual athletic awards in the postseason.

The business administration major was also named an Atlantic Football League All-Star offensive lineman after his second season with the programme.

He said the transition to competing at a higher level has been a welcome challenge thus far.

“It’s been great, a bit more fast-paced, a tough schedule football wise with more meetings and practices and as always learning a new system is a bit challenging. But I’m used to everything now and I love it,” he said.

“A lot of talented athletes on one team going at it in practice and games.”

The X-Men are the reigning 2021 AUS football champions following a 25-17 victory over the Bishop’s Gaiters in the Subway Loney Bowl championship game.

They were eliminated in the national semifinal after a 61-6 loss to the OUA champion Western Mustangs in the U SPORTS Mitchell Bowl.

The game marked the fourth appearance for STFX in a U SPORTS national semifinal bowl game in the past six seasons.