PM: NOT THE TIME FOR REPUBLIC DEBATE – Discussion can be had after official mourning period ends 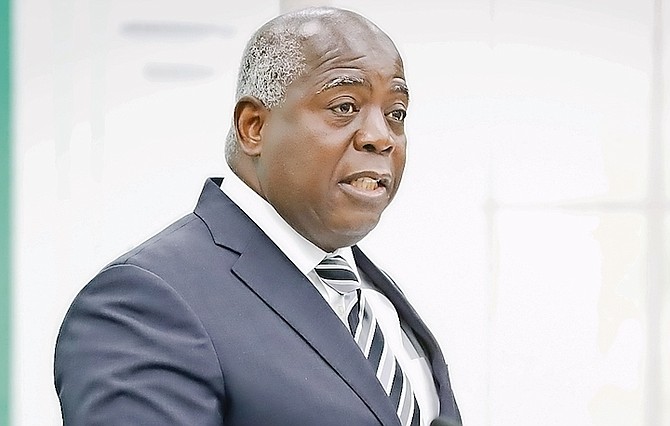 PRIME Minister Phillip “Brave” Davis said he does not believe now is the time to start having conversations about the country’s future with the monarchy following Queen Elizabeth II’s death, adding that discussions over the issue can be had after the official mourning period ends.

This comes after he told reporters last week that a referendum for The Bahamas transition to a republic was always on the table. He also suggested that he supported the move.

“The passing of her late Majesty has prompted pockets of debate about how it might impact any future constitutional arrangements. That said, I do not think it necessary to begin that conversation while we remain in our period of official mourning. Once we have paid our final respects, there will be time enough in the future for such discussions,” he said in his address to parliamentarians in the House of Assembly yesterday.

Yesterday’s meeting was the first one held since June when Parliament adjourned for the summer break.

During yesterday’s short proceedings, parliamentarians paid tribute to Queen Elizabeth II who died last Thursday and also offered condolences to the monarch and the royal family.

“Here in The Bahamas, the death of our monarch and the accession of her heir is both a constitutional and institutional moment of transition. Institutionally, the monarchy has been a part of the fabric of our national life, reaching back to the year 1718 when these islands first became a British Crown colony and constitutionally since 1973, when our country became an independent and sovereign nation,” said Mr Davis.

Mr Davis then went on to speak of the Queen’s impact, noting the many Bahamians who have met her and were impressed by her work ethic over the years.

“In pursuit of her work in creating better relations amongst all people, she visited over 117 countries and is estimated to have made journeys which are the equivalent of having circled the earth some 42 times,” the prime minister added.

“The Queen made four official visits to The Bahamas – in 1966, 1977, 1985 and 1994. Her opening of the new Broadcasting Corporation of The Bahamas in 1977 and the Elizabeth Estates subdivision in 1985 are just two of the legacies of her visits.

“But the role that the Queen played in 1985 during the Commonwealth Heads of Government Meeting hosted here in Nassau was of historic significance. This was the gathering hosted by the father of our nation, the late Sir Lynden Pindling.”

Mr Davis said as the country moves forward from the “Elizabeth II age,” it is his hope that The Bahamas’ relations with the United Kingdom can continue to deepen and grow.

“King Charles III was an early and vigorous proponent of the need to do something more and better to protect our environment. Prince William has followed his footsteps. They have both publicly stated their strong support for the work we are doing here in The Bahamas and I look forward to the further strengthening of the relationship between our two countries especially in this regard,” he added.

He also reiterated his condolences on behalf of the official opposition.

In a separate interview with reporters, he said that while mourning the loss of Her Majesty was important, it was also essential for MPs to “get back to the business” of addressing pressing issues facing the nation.

“We are in the midst of very serious inflation - rising costs of food, gasoline and the cost of living in general,” Mr Pintard told reporters outside Parliament.

“And while it is important, which is why we’re participating in it to mourn the loss of Her Majesty Queen Elizabeth II, we believe that it is even more important for us to get back to the business of addressing the issues that affect the Bahamian people.

“For the (last) 70 years, the Queen has been sovereign over the Commonwealth in many ways. The truth is she has been working, I don’t see how taking a break is going to be a tribute. Against the backdrop of her dying, we have work to do.”

Queen Elizabeth, who died at the age of 96, ascended to the throne in 1952 after her father’s death.

During her reign, she witnessed and experienced numerous social and political changes that included the rebuilding of Britain post-war, their joining and exit of the European Union and most recently, the widespread changes brought on by the COVID-19 pandemic and the Russian-Ukrainian war.

She endured 15 British prime ministers during her tenure.

She was also recognised as the head of state for more than a dozen Commonwealth countries, including The Bahamas despite the country being an independent nation.

However, that title now belongs to her son, King Charles III, who succeeded her.

• The headline for this story has been altered from the original version.

The Bahamas has much more to overcome than the death of 'Elizabeth Alexandra Mary' before considering changes to the Administrative Governing System. We have yet to satisfy the basic needs of Bahamians and control the culture of corruption and privilege among public servants. Hell, I cannot get the current Minister of Fisheries to answer my email after 85-days; The Bahamas have plenty of fixing before anything new ...not to mention the petty political bias that identifies a Bahamian by his constitutional right to give electoral support to a political party of choice, but by doing so will decide his right and how he exists in the country from one governing party to the next, should we move this ugly picture to a new frame? ...fix what we have now first, before adventurism and chaos.

Still not sure why this referendum got quickly flipped into a "Brave" must rush to-do?
Hopefully the premier's team skilled advisors' ... having' delivered a resounding election victory and so far shows tiny baby steps of governance improvements of 'being more accessible to the colony's popoulaces' over that the Pintard inherited RedParty, who are still incapable of putting' two sentences together ... will not so badly misled him as to reach the stage where a man's brain thinks the premier's emotions has traveled too far, not to proceed with what is still in its talking-up a popoulaces' staging of an much too rushed and ill advised permanent break away from new our colony's new King Charles 111's England, referendum beyond too late push maybe later button ― Yes?

Luckily you ComradeUser, the Road traffic's response, wasn't sent to you from the professionals over at Brent Symonette's Town Centre Mall's Post Office ― Yes?

We dont need to be a Republic ............. We just need to tear up the Pindling Constitution and create a real Westminster system with checks and balances that exist in Britain, Australia, New Zealand and Canada .............. and get rid of the "Banana Republic" version that Pindling created in 1973.

Far more important than discussing the idea of becoming a "republic" is having term limits for politicians, including PM's. Nobody should be able to make a career out of suckling at the public purse. MP's should have higher salaries and should be able to serve two terms maximum, then retire without a pension. That would be national service.

Our country is worse off for having people in positions of influence and power for 20 years or more!

We should be more aware of our current system of government and the democratic inheritance we have received from the U.K. Like Canada, Australia, New Zealand and other Commonwealth countries we have a freely elected Parliament, British-style courts and an impartial Governor-General above politics which is the envy of the world. There is no logical reason why we should toss all this aside and the stability which it brings to our country for a republic controlled by politicians. We do not want our Bahamas turning into yet another failed third world republic.