Farewell fit for a queen 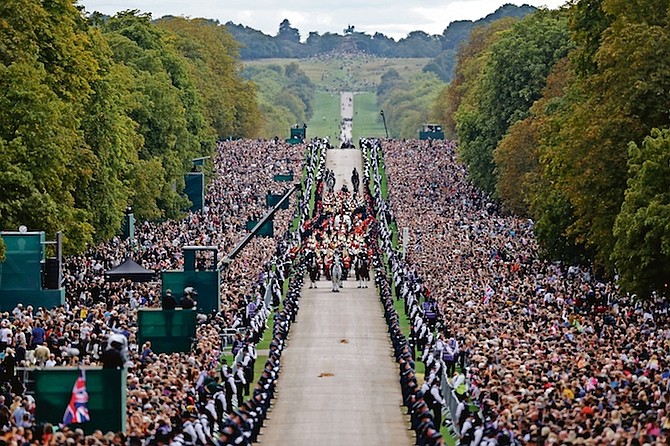 THE HEARSE travels along the Long Walk as it makes its way to Windsor Castle, on the day of the state funeral and burial of Britain’s Queen Elizabeth, in Windsor. Photo: Carl Recine/AP

THE COFFIN of Queen Elizabeth II is carried into Westminster Abbey for her funeral yesterday. Photo: Frank Augstein/AP

In the days before the funeral, Mr Davis met with the Queen’s son, King Charles III, at Buckingham Palace where he conveyed his condolences and good wishes to the new monarch.

On Monday, the world bid final farewell to Britain and the Commonwealth’s longest reigning monarch in a day of solemn ceremony that began in a funeral service at Westminster Abbey and ending in a communal service in St George’s Chapel. 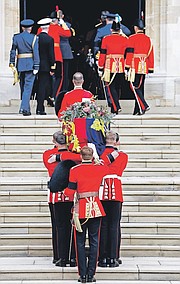 Following a sombre procession through London led by military honour guard amidst streets teeming with mourners, the late Queen’s coffin, atop the traditional gun carriage, was taken to Westminster Abbey for her state funeral with over 2,000 dignitaries in attendance.

There Archbishop of Canterbury Justin Welby during his sermon remarked that the late monarch was a “joyous” presence in countless lives during her 70-year reign. The archbishop also extended personal condolences to the Queen’s family, praying for their comfort in their very public time of grief.

“The grief of this day felt not only by the late Queen’s family, but all around the nation, the Commonwealth and the world, arises from her abundant life and loving service now gone from us. She was joyful, present for so many, touching a multitude of lives and we pray today especially for all her family grieving as every family at a funeral, including so many families around the world who have themselves lost someone recently, but in this family’s case, doing so in the brightest spotlight,” Archbishop Welby said.

“May God heal their sorrow, may the gap left in their lives be marked with memories of joy and life. Her late Majesty’s broadcast during COVID lockdown ended with ‘we will meet again,’ words of hope.”

New British Prime Minister Liz Truss, who met the Queen days before her death, delivered a reading at the service.

After the conclusion of this service, proceedings moved to St George’s Chapel at Windsor Castle for the committal, where the Queen’s procession was met with a gunfire salute to mark her arrival.

Dean of Windsor David Conner led the committal. He commended the late monarch for unfailing devotion to her duty which served as an inspiration to many.

“We have come together to commit into the hands of God the soul of his servant Queen Elizabeth. Here, in St George’s Chapel, where she so often worshipped, we are bound to call to mind someone whose uncomplicated yet profound Christian faith bore so much fruit. Fruit, in a life of unstinting service to the nation, the Commonwealth and the wider world, but also – and especially to be remembered in this place – in kindness, concern and reassuring care for her family and friends and neighbours,” Mr Connor said.

“In the midst of our rapidly changing and frequently troubled world, her calm and dignified presence has given us confidence to face the future, as she did, with courage and with hope.”

Upon the conclusion of public services, the Imperial State Crown, the Sovereign Orb and Scepter were removed from the Queen’s coffin, still draped in the Royal Standard, symbolising the end of her reign.

A stoic King Charles III then placed the Queen’s Company Colour on his mother’s coffin, a small military flag denoting where a commander stays, which was laid to rest alongside Her Majesty. 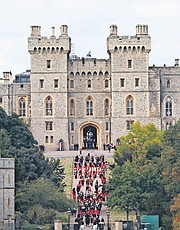 THE COFFIN of Queen Elizabeth II is carried in a hearse towards Windsor Castle during her funeral procession in Windsor, England, yesterday. Photo: Alex Pantling/AP

In a rare moment of privacy, the British Royal Family said their last goodbyes to their matriarch in a private ceremony later that evening. The Queen was laid to rest in the King George VI Memorial Chapel beside her husband Prince Phillip, who died last year.

Queen Elizabeth II died at her summer residence in Scotland on September 8. She was 96.

In a message issued on Sunday, Mr Davis said the Queen “lived by the self-same principle which she urged upon us in her 2004 Christmas message, when she observed that ‘Everyone is our neighbour, no matter what race, creed or colour.’”

He also said: “In these turbulent times, we have lost in Her Late Majesty, a beacon of constancy and stability. For those of us who are people of faith, we understand the Queen’s lifetime of service as part of God’s plan. And so, we give God thanks for her life and legacy.”

Monday was observed as a national holiday here at home in honour of the Queen.

Most British subjects seem to have great difficulty singing "God Save The King" with Charles sitting on the throne, especially the older set. And the younger ones are just not into monarchies, period.

Bey, that's a long walk. Would not want to be them

How much did this cost the UK govt?

In my thinking, though the English's national period of mourning for Queen Elizabeth has come to a close across the pond in England, certain local media houses aren't yet done playing up mourning whilst ignoring pressing bread and butter issues right here locally ― Nah?

Correction The UK Government doesn't have any money it's tax payers money.

However as a point of interest The Bahamas gets the monarchy free, apart from the odd visit and a governor general's costs.

So The Bahamas if it decides to become it's a republic you can bet the cost of a president and all the trimmings will cost many more $s than the Bahamian tax payers contribute now.

For sure a prospective President, who will no doubt be a political party hack will cost a lot! God help The Bahamians if the President has power. In general the majority of Consitituional Monarchy's in the world are stable democracit's that certainly doesn't apply to most republics

@ComradeTom1912, wouldn't you think as the new King of England, the question will be popped as to His Majesty. introducing a conditional consent clause, making the unshackling to become a republic, subject to CARICOM's former English empire, colonies, must first forgo their demands that the English pay up in the Billions of Pounds in compensation to its enslaved claimants' ― Nah?

If you review the history of the UK while it [ You would like thiis "if" being the ruling classes :) ] was subjugating the rest of the world the majority of the UK population were treated as surfs even as late as between the two WWs such as my father a miner working in 3 to 4 foot seems for private mine owners never mind those being "in service" treated like s**t . Fortunately WW1 decimated the ruling classes and WW2 put the final nail in their coffins! Any way I can't wait for the UK government to seek reparations for my ancestors from the Italians [aka Romans] the Moroccans [ aka Babar slavers] The Norwegians/Danes [ aka Vikings] French [ aka Normans]. Also I'm sure there are still some of the indiginious west african tribal leader's ancestors, who sold slaves to the Europeon powers will no doubt pay up reparation to all those in the WI, North and South America. Slavery was endemic all over the world in the past some much more than the vial trans atlantic trade! :) :)

We do not want a politician's republic in our country. Another failed third world republic is not a bright future. Our Constitutional Monarchy system, as in Canada, Australia, New Zealand and other realms, is a safeguard of our civil rights and liberties. It has a proven track record which helps bring in overseas investment. It is a stable anchor which we need to maintain.

A very moving and touching service. The precision and coordination of the funeral was first -rate.

It was an it even brought a tear to my anti privilege royalty eye but not against a constitutional monarchy.

The present working royal family ineffect live in a guided cage while I've never been a lover of Charles but he being only two years younger than me, I was impressed with his stamina in following the four seperate cortèges.

I saw Churchill's funeral on a small BW TV. Funny enough my farther [An ex-miner) had no time for Churchill because when Home Secretary used solders to shot striking welsh miners during the time between the two WW.

God save the queen anthem, song, or whatever it's called is ludicrous, why should I be asking GOD, my father, to save her? GOD save me, my family, and she wasn't singing God save Mandela. Gats to be crazy.