38 charged over breach of bail conditions 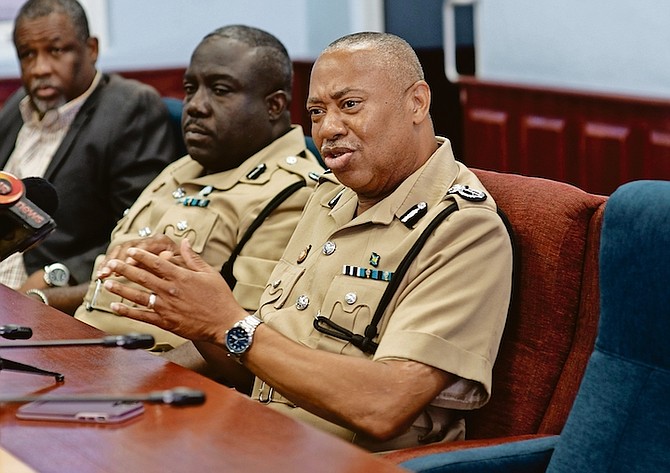 GUNS found over the weekend on show at a press conference yesterday.

POLICE Commissioner Clayton Fernander said police recently charged 38 men who were on bail for serious crimes and were being monitored for breaching their bail conditions.

He said many suspects on bail for serious crimes intentionally fail to charge their electronic monitoring devices so as to commit more crimes. He made the revelation yesterday during a press briefing at police headquarters.

“Within the week, we charged 38 young men who was being monitored and is on bail for serious crime - for murder, armed robbery, possession of unlicensed firearm - who had breach their bail application,” he said.

“But based on other evidence, we were able to connect them with a number of serious crimes, and they will be charged. So we have stepped up our game and it’s a reason why the court give them bail and they are being monitored for the police to do just that - to know where they (are) at all times. They have curfew and if they don’t honour that, then we have to put them back and keep them behind us. They are the individuals who continue to give us problems. We charge them. They’re charged firstly with the offence, they get bail, and still continue to breach their bail.”

Last month while he was a guest on Jerome Sawyer’s “Beyond the Headlines” television show, the commissioner said officers’ work is more burdensome when courts release those arrested on bail and police then often arrest them for the same offence.

Yesterday, the issue of relying on people on bail to charge their ankle bracelets was brought up.

“We just have to pay attention to it. It’s working for us. And that’s why you see those individuals who breached their curfew. Some of them have curfew where at 6pm in the evening, you should be in your home. And then we find some of them after 6pm involved in crime. Something’s wrong with that. And that’s why we are paying so much attention to that.

“What more to justify the reason why he or she cannot stay behind bars? What more do you need? If you let your battery go dead, and go out there and commit crime? You think that individual should be given a second chance to do it again? No, man.”

The commissioner also spoke about a shooting on Dunmore Street on Saturday when gunman opened fire on a group. He said at one point, one of the suspects was accidentally shot by his partner. Police were able to connect those suspects to a recent murder.

He said after a police chase, police pulled over the suspects’ vehicle in the Fort Fincastle area.

He added: “During the search, officers found three loaded pistols in the vehicle. Those weapons were recovered. The young man who was shot, he was eventually taken to hospital, where he is presently detained in ICU in serious condition at this present time.

“The other two culprits, they are presently in custody. What is so significant about this matter, officers during their investigation, we found out and we also got physical evidence collected from that scene, from that vehicle, which is connected to the shooting death of the four-year-old who was shot at Dunmore Street.

“And we were looking for a second individual with respect to that matter and he is presently one of the persons arrested in this incident and is connected to that matter. So we’ll be looking at that as well. And expected to bring some charges at a later date.”

Based on intel, Dunmore Street is a hot spot for criminal activities, the commissioner said.

“The team headed by Chief Superintendent Goodman, the ceasefire team as I indicated, was moving about in the various communities, disrupting the gangs and drug peddlers within our communities. They went back into that area and was able to search a yard where they arrested 10 individuals who was in that yard with a high powered rifle.

“As you can see, right there before me. An AK was recovered. AR 15 just in the front of me with a pistol and a number of ammunition was found in that same yard. So something is going on in that Dunmore Avenue and we will break the back of that criminal activity that is going on in that area.”

He said other hot spots are being targeted with saturation patrols as well.

He pointed to other areas that are being targeted with saturation patrols at this moment.

Asked about the current murder count and how it compares to last year, Commissioner Fernander admitted he does not like “to give that” figure out but said “we should be around about 94 to 95” killings so far this year.

Fernander said "many suspects on bail for serious crimes intentionally fail to charge their electronic monitoring devices so as to commit more crimes."

LMAO. All show for nothing at the end of the day.

This grotesque fool of a police commissioner we now have doesn't even realize many of those being charged can no longer afford food, medicines, etc., much less the cost of the electricity to charge the batteries in their monitoring devices.

And we all know that for every single one of them he puts back in our extremely over-crowded prison, another dangerous prisoner must be set-free to make room. Brain-dead Fernander thinks we are all as stupid as he is.

Why isn't he crying for government to do something about our illegal alien and prison over-crowding problems?

I mean it kinda isn't his job nor responsibility to run or worry how prisons are run. We have a whole other departments, Corrections & Immigration that should be dealing with that but doesn't.