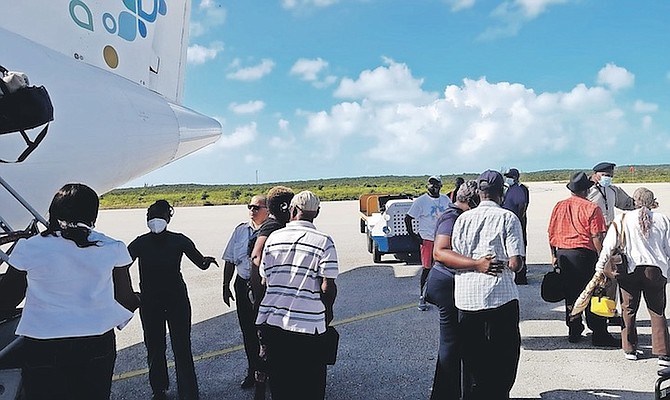 MAYAGUANA residents after being evacuated out of the path of Hurricane Fiona. Photo: BIS 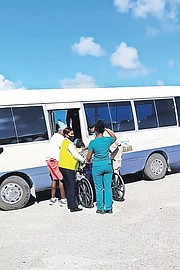 ELEVEN Mayaguana residents were evacuated off the island yesterday, as residents of the southern Bahamas braced for the impact of Hurricane Fiona.

Hurricane Fiona, a category three storm, caused widespread devastation in Puerto Rico as its strength grew and made its way into Turks and Caicos yesterday, according to international reports.

Acting Prime Minister Chester Cooper spoke to reporters about the storm yesterday, noting that government officials were working actively as Hurricane Fiona made its way to the southern Bahamas.

Residents who were said to have comorbidities were taken off the island. While Mr Cooper said yesterday morning that 21 people were expected to be evacuated, an island official told this newspaper only 11 left. Ten were among those identified as “medically at risk” and one accompanied one of the patients.

The others declined to leave, the official said.

Mr Cooper added that the shelters on the island were open and supplies such as tarps had been issued to the island through Bahamasair along with the mailboat.

When asked about there being a shortage of lumber on the island, Mr Cooper said lumber would have not been one of the supplies sent yesterday morning by Bahamasair, however, other needed materials were sent out.

He added: “The reality of the situation on the ground is that it’s a very remote island and any supplies like plywood, etc, would have had to go by mailboat. Some time ago, I heard the reports of requests or promises by NEMA to the residents; we’re looking into those reports.”

Mr Cooper said all homes on the island have been visited by local government officials, particularly residents who were seen as “vulnerable” and advised to evacuate to Exuma.

For his part, Myles Laroda, state minister for disaster preparedness, said yesterday the residents who were to be evacuated from the island had comorbidities. He explained that older people or those with health conditions were seen to be at risk.

“There was a concern that was expressed by the medical offices and the administrators on the island that those people should be evacuated,” Mr Laroda said.

Mr Laroda said he spoke to the island administrator of Exuma, Cristian Palacious on Monday.

He added: “I spoke with Captain Neil Campbell, the director of local government this morning who confirmed that all is a go with regards to the residents from Mayaguana. Provisions have been made with food and also with accommodations for them.”

The Office of the Prime Minister also issued a statement yesterday on Hurricane Fiona.

“The government is closely monitoring the development of Hurricane Fiona, a category three storm which is forecast to impact the southeastern Bahamas today (Tuesday).

“Fiona is a dangerous category three hurricane, which on its projected path, is expected to impact the islands of Mayaguana and Inagua (Tuesday) with tropical storm conditions. Fiona is packing maximum sustained winds of 115 mph and is moving NNW at nine mph. The storm is likely to further strengthen into a category 4 hurricane later today and could strengthen to category 5 by Wednesday,” the press release said.

The press release also said a team of Defence Force officers arrived on Mayaguana yesterday morning with food, blankets and other supplies.

“A Defence Force vessel stands ready to depart for Mayaguana this afternoon with additional manpower, food and water, generators and other recovery tools and equipment should the need arise.”

LMAO. It would have been much less costly had Health Minister Darville flown down there and jabbed them all with the new experimental anti-hurricane vaccine.

you een no good. lol