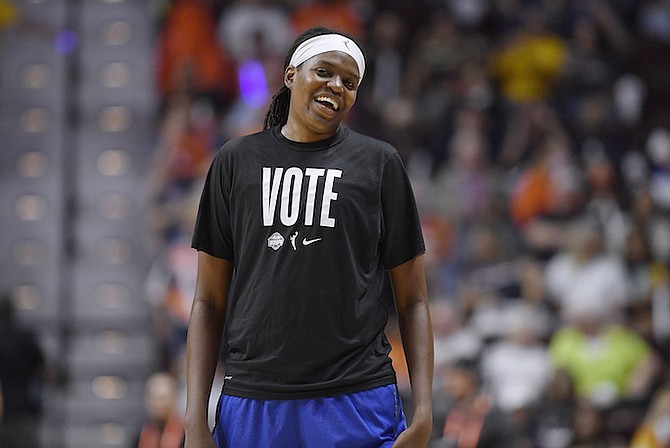 Just days after her WNBA season came to an end, Jonquel Jones returns to international play with Bosnia and Herzegovina at the FIBA Women’s Basketball World Cup.

Jones and her side are among the top 12 women’s national teams in the world, competing at the tournament September 22 to October 1 in Sydney, Australia.

BIH will play in Group A that also includes Belgium, China, Puerto Rico, Korea, and USA. They open competition against Puerto Rico today at 2:30pm, followed by a Friday matchup against China, Saturday against Korea, Monday against Belgium and Tuesday against the United States.

At the end of the Group Phase, the top four teams of each group will advance to the Final Phase.

A draw will determine the pairings of the Quarter-Finals.

The two best-ranked teams of each group (group A and group B) will be drawn against the two teams ranked third and fourth of the other group.

The USA has won the World Cup 10 times, followed by the Soviet Union with five while Brazil and Australia have each won once.

Jones delivered a series of spectacular performances en route to leading BIH to World Cup 2022 qualification. Jones led BIH to a 1-1 record and was named TISSOT MVP and a member of the All- Tournament team at the World Cup Qualifying Tournament last February in Osaka, Japan.

In game one, she finished with 15 points, five rebounds, five assists and two steals in a 96-64 loss to Canada.

In the tournament clincher, she finished with 36 points and 23 rebounds in an 87-82 win over the host country. She shot 14-24 from the field, 2-6 from three-point range and also added four assists in 39 minutes.

Jones continues to lead BIH to a series of milestones for their national team programme. She led the team to an historic fith-place finish at Women’s EuroBasket 2021 and continued that dominance at the Eurobasket 2023 Qualifiers last November.

She finished with 30 points and 17 rebounds in an 80 -64 win over North Macedonia and a career high 44 points and 22 rebounds in her team’s 87-81 win over Belgium. BIH enters the World Cup ranked at no. 26. The 2022 season ended on a disappointing note for Jonquel Jones and her Connecticut Sun last Sunday when they were defeated by the Las Vegas Aces 78-71 in game four of the WNBA Finals.

Jones had a 2022 season to remember following her 2021 MVP campaign. She was named to the All-WNBA Second Team, the All Defensive Second Team, and received her fourth WNBA All-Star selection, voted a starter for a third time.