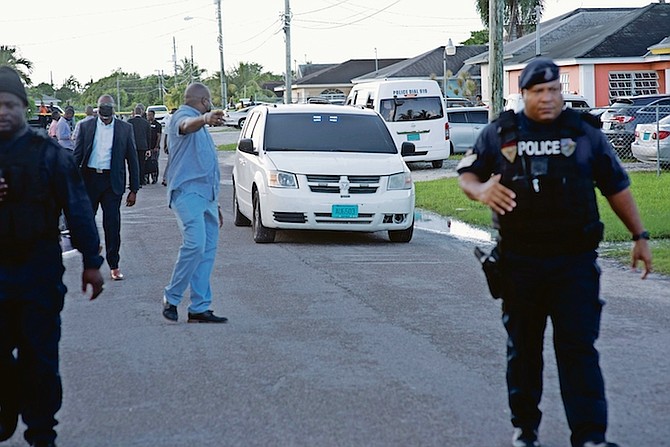 The body is taken from the scene of yesterday’s shooting. Photo: Moise Amisial 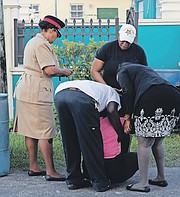 A WOMAN is comforted at the scene of yesterday’s murder. Photo: Moise Amisial

POLICE are investigating a second homicide in as many days after a man was shot dead yesterday morning off Hamster Road.

A day earlier, police said a man was found dead in a stairwell in a building on Boyd Road with stab wounds.

Press liaison officer Chief Superintendent Chrislyn Skippings said around 7am, police were alerted that a man had been shot multiple times.

No formal identification has been made, but a well-placed source reported that the victim was Darren Gibson.

“Our preliminary investigations or information thus far reveals that a male had just left a residence here when a van, believed to be either white or green, approached the deceased,” she told reporters on the scene.

“It’s reported that a male who was clad in all blue, short blue pants and a blue shirt, exited the van, approached the victim and shot him multiple times. EMS was here on scene and they pronounced that there were no vital signs of life.”

She added that the victim appeared to be in his early 40s. At the scene, she said there was no indication to suggest he is known to police.

Asked about a vehicle that officers were investigating with a government licence plate, CSP Skippings said: “We believe that there’s some connection with the vehicle and the deceased, but at this time we’re not able to say if he owns the vehicle.”

In August, Police Commissioner Clayton Fernander said he hoped the country could “finish the year strong” and not surpass 100 murders this year. At the time, there had been 85 killings.

The country is now primed to pass that 100-murder mark with yesterday’s killing making the 97th for the year, according to this newspaper’s records.

CSP Skippings expressed a similar sentiment of not wanting to hit 100 homicides this year.

CSP Skippings mentioned the commissioner’s press briefing earlier this week where weapons recovered during the past week were shown.

She added: “And if we look at the amount of ammunition that was recovered during that time period, that was well over, I think, about 100 rounds of ammunition. So if you take one ammunition, or one round, that’s one life that was saved. And so we’re continuing in the fight against crime.

“But I want to reach out to parents, family members, girlfriends, and significant others. If you know that your partner or your friend, or your relative, or someone who is in possession of a firearm, you need to reach out to your law enforcement agency - you need to partner with us.

“That same weapon that your friend, cousin, brother, nephew may have - they may have to harm someone else.

“But in reality, that same weapon can be used to take your life. And so it’s important that you partner with your police department and give us that information so that we can remove all of these illegal weapons.”

There is no more LOVE in the hearts of men and women of this generation, they will resort to shooting for the most frivolous reasons that can come to mind. They hate themselves and their lives, so therefore they are easy to hate everyone else. Animals. We need swift justice. for example, if a person is caught on camera committing a crime and is apprehended, why does justice for this takes two to three years to complete instead of one day? Wasting time, that's all we do with these animals, wasting time.