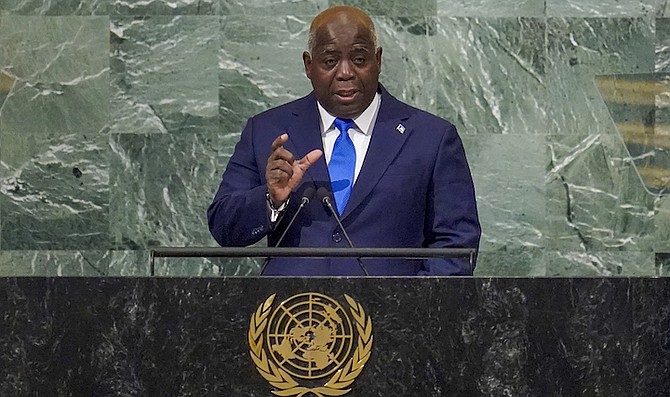 IN HIS speech to the United Nations General Assembly on Saturday, Prime Minister Philip ‘Brave’ Davis addressed The Bahamas being placed on the OECD’s blacklist yesterday, saying “The evidence is mounting, that the considerations behind these decisions have less to do with compliance, and more to do with darker issues of pre-judged, discriminatory perceptions. Let me submit, black-governed countries also matter.”

Mr Davis also discussed the issue of climate change, asking: “Why should small island nations like mine – we who have contributed so little to the climate crisis – experience the biggest burdens and risks of a changing climate? The argument might be straightforward – but it has not been effective.”

And the Prime Minister spoke of regional issues in Haiti and Cuba and their impact on The Bahamas.

“When my neighbours are in crisis, whether the cause is climate, or crime, or instability, The Bahamas is impacted by the humanitarian and security needs which arise,” he said.

“We repeat once again our opposition to the decades-long embargo and sanctions on Cuba. COVID has exacerbated the situation for the people of Cuba, and made existing hardship and deprivation much worse.

“The people of Haiti continue to suffer. The political vacuum left after the assassination of the President just over a year ago, has led to more violence – with the instability fueling more tragedy and threatening the entire region.”

Nah - others globally will not actually believe this to be true. Now that the leader of a multicultural/multiracial colony was captured by a global forum's camera playing the race card ― Yes?

It is the truth....... Black leaders are always blacklisted

Sheet-runner; you have missed the [point, if you put 193 rodents in a cage with only 153 meals. then you will see conflict.

Both PLP & FNM failed in this regard. The gist of the OECD is that the Bahamas should not be a tax haven for foreigners. Resolving this issue is not complicated at all. Pass laws which require foreigners to show taxes have been paid on the money they bring into our country.

Don't be narrow minded. From Haiti in 1804 to the last black colony to be liberated, the white imperial powers have found ways to stifle or retard these uppity black leaders.

They don't see these black countries as EQUALS.

Focus on addressing corruption and fiscal responsibility and leave the Race Card to other insecure people … much like nonsense of becoming a Repuplic.

Gotta agree with you Bana! PM should do something instead of complaining.

Your assertion is accurate, Mr. Prime Minister. How about being original, though. So much of what you say is after the fact - especially after other world leaders have broached the subject.

By the way, beyond speechifying and using Haitians - especially immigrants - as a political football, what concrete leadership are you providing in terms of meaningful assistance to neighborus like Haiti? What are you suggesting be done to meaningfully reduce the carbon footprint of our tourism industry? I don't, for example, see your administration prioritizing the development of eco and scientific tourism.

The government simply dropped the ball on this current blacklisting. They took too long to come down from their election euphoria, while important decisions remained untouched!

Finance was too busy allocating funds to payout to cronies. The AG was too busy AG was too busy with inane cronies court matters. Key, knowledgeable persons in Finance warned the FS over and over (in writing) that URGENT action was required. So instead of urgent action, they again hired an incompetent, no-ethics person from their roster of cronies.

Now we want to play the race card and speak on the world stage that we are being singled out when WE COULD HAVE FIXED this problem months ago. I'm sorry Prime Minister, it's a no for me.

Could it be that many black government countries are among the most corrupt ones? Switzerland Finland New Zealand compared to Nigeria, Angola,Moçambique, Sudan, South Africa?

Hmmmmm, you might be onto something! I think the politicians would much rather keeping the population dumb and dependent so they can continue to pilfer!

Cruel and corrupt Davis just could not resist foolishly playing on the world stage that race card culturally ingrained into the Bahamian pysche by 25+ years of corrupt SLOP-led PLP dominance in the political arena.

And that long period of PLP political dominance had as its primary objective using racism as the diabolical trump card to dumb-down the masses and create a wealthy elitist political ruling class by way of unbridled corruption. Anyone remember how many times the movie Roots was shown on ZNS-TV by SLOP? Obviously watching too much Oprah on TV did a real number on Davis's most unbalanced head.

How can we Bahamians ever be a proud people when we have the very despicable and shameless Davis always playing the tired 'ole race card as self-anointed Beggar-and-Chief of The Bahamas? Davis is very much a broken phonograph record.....totally stuck in the past and playing that tired 'ole race card over and over again. Truly pathetic!

Looks like the UN General Assembly was another waste of time and money...

Nah ― For premiership only now baby crawling along its 5 year governance mandate's second year and still enjoying positive voter innocence retention. Left surprised at why a leader would use race as their out character, standing out global moment* showcase his colony's Five-hundred thousands+ popoulaces' of commoners' ― Yes?

Bottom line: Corrupt and incompetent politicians in our country like Davis have a long history of playing the tired 'ole worn out race card in an effort to exploit divisiveness for self-gain in any hideous way that they can. And by being PM of The Bahamas, Davis not only made an embarrassing fool of himself on the world stage, but he also shamed the Bahamian people.

Our Prime Minister is 100% correct with his OECD alignment. Records show that France was jealous of our financial success and that many USA jurisductions like Delaware and UK, Cayman stole Bahamas' clients. They really broke the Bahamas knees with a chain saw. Climate change still the world continues to place the Bahamas among the top 2 for 100& clean air and zero negtive global impact. Repatriation trips to Haiti costs us millions. Haiti produces many fruits and vegetables but we must import them from Florida. The geopolitics with Cuba sways according to Latino votes in the USA, and not with human rights as even the United Nations constantly condemns the embargo. Venezuela has dirt cheap oil and gas but we cannot buy it directly. We are global victims but we have our own rot. Gaming Board still encourages addictive gambling that earns our new negative bad capital interests up to 6 billion dollars and as Pindling cursed has destroyed the working mind body and soul of persons lives families, society and Out Island community life, creating a new National Culture of parents asking children what they dream rather than morning and nighttime collective prayers. The Gaming Boys are our new UBP, only they are black and hold considerable power over Bahamian politics, international banking negativity with 75% decline in presence, destruction of female intellectual growth and male Academia. Gambling is our greatest national destructive force with Christie our mist wreakless leader combined with Minnisitis.

In the words of Barbados Prime Minister, the Honorable Mia Mottley, "we have also seen others use alternative mechanisms."

@ComradeIslandWarrior, what gain has resulted for Barbadians' popoulaces', since Mia Motley's using the power of her office to single-handedly and without consultation ... lowered their colony's flag ― Yes?

The blacklisting and attack on our finance industry is simply a tool used to lessen our diversification of income generation. If we were a huge grower of grain then you had better believe that we would be attacked on that front as well. Our grain would be found to be of poor quality and supported by human rights violations etc. etc. We will simply not be allowed to be a power house of anything - not even tourism, as it would make us too independent and less needy of the mechanisms and organizations (i.e. money) created by the G7.

Bingo .......... If you are not in the G20, your chances of being "independent" and "successful" as a sovereign state on Planet Earth is diminished by the day.

The G20 countries have found creative ways to strangle the other countries in every facet of national development whether it be financial, military or diplomatic.

I don't agree with the wording of the sentiment Brave is expressing, but he isn't far off. He shouldn't focus on the race calling as that just causes division and makes the issue less supported

The EU and friends will continue to economically bully us until we are like Haiti living on benefits, the only reason they antagonize the Caribbean is because we found a way to make real money. They want to put is in chains again, its Economic Colonialism of the highest order.

Above is the link to two articles referencing the issue.