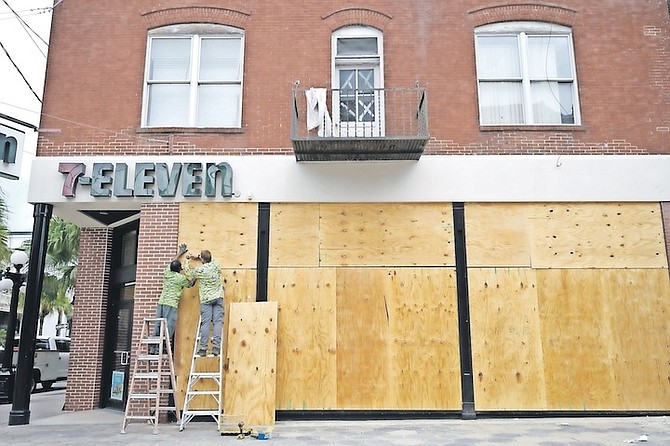 WORKERS board up the windows of a 7-Eleven convenience store in the Ybor City district in preparation for Hurricane Ian as it approaches the western side of the state, in Tampa, Fla. (AP Photo/Phelan M. Ebenhack)

BAHAMIANS living in Florida are bracing for the arrival of Hurricane Ian, which is heading their way.

The Ministry of Foreign Affairs has urged Bahamians living in Western Florida and Cuba to evacuate, exercise caution and pay close attention to the approaching storm.

Patrelle Major Cross, a Bahamian who is staying in Orlando, Florida with her husband and children said, like most Bahamians, hearing the word “hurricane” brings some “initial panic”. Having all of the necessary information, supplies and being well prepared is what alleviates her worries.

“Like most, upon hearing about Hurricane Ian, there was some initial panic, however, with preparation and information, it helps to alleviate that fear. I’m no stranger to storms due to being from The Bahamas. Having said that, I do not take it lightly. I understand that things can change very quickly,” she said.

“Some of the things we are doing to prepare for the storm are things such as making sure we have ample water supply, food, such as canned goods and dry foods, an emergency kit, life vest, flashlights, candles, matches and sandbags and, of course, to the best of our ability some form of entertainment for our kids. So, for the most part, we’re praying and hoping for the best,” Mrs Cross said.

Andira Ferguson-Minnis, another Bahamian also currently in Florida with her family, said she is also well prepared for Hurricane Ian, as they start collecting supplies each year, beginning June 1.

“My family and I, we’re not new to this, I actually begin my hurricane preparations in June. We do the best we can to keep up with supplies in the event that something happens. I think we’re adequately prepared for whatever happens,” she said.

“From June 1, we do let anything less than three cases of water in our household. In terms of canned goods, we make sure we are adequately stocked on canned goods from June 1 to November 30, whether we need it or not, we go and buy if we have used one of those items,” Mrs Ferguson- Minnis said.

She echoed Mrs Cross’s sentiments about being familiar with hurricane and storm preparedness as a Bahamian, but added that hurricanes tend to be unpredictable.

“It’s actually a pretty good day, calm, it doesn’t seem like anything is happening. Growing up in The Bahamas, of course, we’re familiar with how to prepare and the things that you may or may not have access to. This is not my first hurricane in Florida. So we’ve actually been privileged to not have to deal with loss of power, but you don’t know what to expect this go round,” she said.

Judith Strachan, who is in Daytona Beach, Florida, said she is also more prepared than worried as this is her second experience with a hurricane while being in the United States.

“I am feeling pretty calm. I got supplies like water, food, made sure my gas tank is full. I still have work, but other than that I feel fine. I’m not afraid or anything. I’m just feeling it out and seeing where it takes us, because right now it’s starting to rain and stuff, but it isn’t bad or anything right now. The only thing I would be worried about is really floods and stuff, but for now, it’s fine,” she said.

“I’m in the Daytona Beach area, however I did hear that people in Tampa, they put out an evacuation order for them. So, it’s going to be worse over there.

“We’re going to feel something, but until then, I’m just going with the flow I guess. For right now we still have to come to work. I don’t know if anything will change. It depends on the weather, I guess,” Ms Strachan said.

All Bahamians in Florida with special difficulties or concerns about the approaching storm are encouraged to call The Bahamas Consulate General in Miami at 786- 795-5826. And those in Cuba should contact the The Bahamas Embassy in Cuba’s emergency hotline at +53-7-206-9918.

Bahamians are asked to keep an eye on local and international news stations for weather updates, or visit the National Hurricane Centre’s website at nhc.noaa.gov.