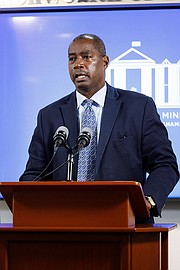 GRAND Bahama and Bimini fared well as Hurricane Ian made landfall on Florida on Wednesday, with isolated power outages in Grand Bahama, some roof damage to the clinic in Bimini and minimal flooding reported.

All tropical storm warnings and watches were lifted for the Bahamas early yesterday morning as Ian, now downgraded to a tropical storm, moved further north along the US east coast.

“We are pleased with how we fared with this system, which is a powerful storm that impacted the western coast of Florida and the severe damage we see coming from those areas,” he said during a press briefing. “Thank God, we have not been impacted by that system as it came across the east coast.”

“The only thing that stands out in Bimini is that the clinic was compromised (Wednesday night) and persons were relocated to the administrator’s building,” he said.

Teams from the Defence Force, he said, are in Bimini assisting with securing the roof of the clinic to prevent any further damage to the health facility.

In terms of flooding, Capt Russell reported that central Bimini was affected due to drain problems identified earlier in the year.

“Reports of flooding in Alice Town and Porgy Bay areas of Bimini that is a standing problem. Early in the year when potential tropical cyclone one passed through, the minister (of works), myself, with a team from Ministry of Works, went to Bimini and looked at the drain issue there.

“And they are trying to design the system to rectify the flooding problem in central Bimini. It is something to do with water coming from the sea backing onto the land, and when you have hightide you have flooding in that area. So, they are devising a plan to rectify flooding issue.”

“The (GB Power) team is trying to rectify the problem as soon as possible to restore power to the western Grand Bahama area,” he reported.

According to an official at GB Power, an estimated 10 to 15 percent of customers on the island were affected by a power outage.

Cleopatra Russell, director of communications at GB Power, reported that strong wind gusts brought down a pole at Coral Road and East Sunrise Highway causing power outages for a number of customers in the Ridge, Cove House, and Malibu Reef areas.

“We were able to secure the pole late yesterday evening, and with the help of police cordoned off the street.

“We went back Thursday morning and replaced the pole and customers experienced a brief outage during the pole replacement,” she explained.

Ms Russell reported that the western end of the island experienced an outage shortly around 3am Thursday as a result of one of the last feeder bands coming in with a substantial amount of rain and gust. She said that crews were able to address the issue and restore power shortly after noon.

The GB Power system held up pretty well, she said.

“Other than that, our system fared well. Whenever there are winds in excess of 20 or 30mph gusts sometimes debris, trees or shrubbery end up in our lines. The majority of customers experienced isolated outages as a result of the system coming in contact with debris or trees, or maybe some loose connection,” she explained.

Capt Russell said a total of seven shelters were opened on Grand Bahama and Bimini. He said persons reported to one shelter in Bimini and one in Grand Bahama.

“We had a total of 14 persons that reported to the shelter,” he stated.

The shelters were deactivated yesterday morning.

Why was this even a thing? Why are we searching so hard for a storm to respond to? We dont want a storm. Thank goodness we havent had one so far. The report should be we dodged a bullet not look how well we handled this. There was nothing to handle. In fact our benchmarks for heavy rains should be did drainage improve. Drainage was terrible.

I’m told the flooding on the northern island of this twin Island the Lucayans called “Bimini” has been significantly aggravated by dredging of its harbour by the Bimini Bay developers over the years. Continuing ‘development’ of the area once called East Well (now Bimini Bay) will damage a natural fresh water cistern that drains from north to south with even further environmental degradation of this once beautiful isle.

Government should look into these concerns as part of their assessment and correction of the drainage and flooding issues. Bimini’s recent tourism boom should warrant greater government scrutiny and support.

110% agree and well said!!!! That entire resort and it's infrastructure is way, way too big for the north island. Can't believe it was approved and allowed to be built. So sad.