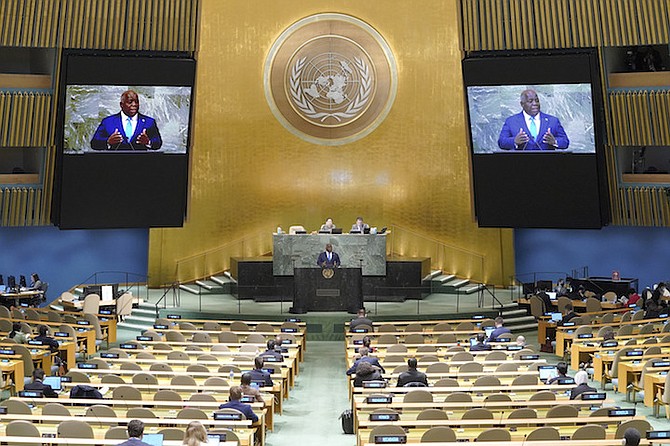 PRIME Minister Philip “Brave” Davis has defended remarks he made at the United Nations last week regarding the European Union blacklisting, saying the time has come for these nations to account for what they have done to countries like The Bahamas.

He told reporters that his “cry” at the UN last week was also made to ensure the body takes over the policing of the anti-monetary and anti-laundering and terrorist financing regime to make it more “fair” for small island developing states.

Asked about his comments yesterday, he doubled down on his assertions.

“And that suggests to me and it’s compelling evidence to suggest that black governed countries don’t appear to matter to the European Union and my cry was to ensure that the United Nations take over the policing of the anti-monetary and anti-laundering and terrorist financing regime to make it more fair for small island developing states like ours.”

Mr Davis asserted he is speaking for The Bahamas and “we are being hurt by countries outside our realm.”

“The time has come for them to account for what they’re doing and doing to us. And I’m not gonna sit idly by and not make the case for our country,” he said.

Asked if as the finance minister he was ready to do what needs to be done in regards to tax reforms for compliance, the Cat Island, Rum Cay and San Salvador MP said he just wants nations like ours to be treated fairly.

He said: “First of all, what we want to be able to do is do the same thing that the big countries are able to do and so if they require me to pass a bill that impacts the financial services industry — I’d like to know that they’re doing the same thing.

“Our regime is set up to suit our purpose and we are the most regulated. We’re one of the most best regulated financial jurisdictions in the world but still there appears to be this constant, moving of the goalposts and there’s constant assault on countries like us, and I’m not gonna stand idly by without having to say anything about it. I need to let the world know.”

Yesterday, Mr Davis also addressed the renewed criticism regarding his administration’s travel spending. The government’s travel spending ignited further opposition attacks after it was revealed recently by Tribune Business that the total $11.8m outlay for the 2021-2022 fiscal year exceeded budget allocations by 11.1 percent.

The country’s leader argued that The Bahamas cannot isolate itself and must look outward to make relationships.

“We are a small vulnerable country and we cannot operate on what I call an isolationist policy. We have to engage the world - that is why we are doing well.

“We’re not doing well because we are an isolationist country. We are dependent on what’s going on around us,” he said.

“The United States, Canada and those large countries, they could perhaps practice isolationist policies, but we are unable to do that. Otherwise, we will revert to our country, our people suffering more or being worse off then they are. So the issue of travel and the costs of travel - I’m not on any frolic of my own. When I’m frolicking on my own, my own funds are used.”

The UN is a grand joke now. How can they allow Russia to remain part of the UN after they invaded - and now annexing part of - a neighboring country? Surely the UN have rules that can remove/suspend a bad actor for something like this? Even if removing their ability to vote on topics until they recall all of their troops and settle any reparations.

Well said. I couldn't agree more! At a minimum, Russia's voting ability needs to be revoked at this time.

Agreed. The UN is unable to stop Russia.

If Russia remains as a permanent member on the Security Council, the UN is doomed.

This war would have never happened had the likes of Nuland and Blinken minded their own business and not overthrown the legitimately elected Yanukovych goverment of Ukraine. There is no way that anyone with sound mental faculties could expect Russia to allow a hostile puppet regime to be set up on its borders and not intervene. The same group are back in power in the US and they will get the WWIII that they are looking for; I hope they are ready for it.

If you really want to dig deeper into this conflict, read up on the Odessa Trade House massacre. There is a whole lot of backstory to this conflict that is not being touched upon because the people who own the media have an agenda that they are trying to push; this situation did not develop overnight. The only person better than the media at lying and hiding the truth is the devil himself.

Very happy to see PM fighting back at the immoral, greedy and hypocritical actions of the EU. Not so happy with the rubbish response on the question of exorbitant travel costs...once again deflecting from the issue. Of course we, the People, want our country to look outward and make relationships...the obvious point is that to do that you don't need to send "gussie mae" sized delegations of cronies all over the world, flying first class and staying in 5 star hotels everywhere. Send just the minimum people to get the job done, and send the right people, not the cronies and tag-alongs.

Just this past April Our Colony of Out Islands voted along with 92 other countries to suspend Russia from the United Nations Human Rights Council following its “gross and systematic violations and abuses of human rights” in Ukraine .... Nah ― to article 5 of the UN Charter which provides for a member state's suspension .... Russia would veto a resolution recommending its own suspension ― Yes?

G7, EU and NATO shellacking by Russia is enough. Our great Brave added in our little toe kick to might equals right OECD. If get near to achieving fuel or financial liberty we will get whipped back into position. Africa also told them off this week. BRICS nations are all under threat for seeking an opinion and sovereign viewpoint.

Asked if as the finance minister he was ready to do what needs to be done in regards to tax reforms for compliance, the Cat Island, Rum Cay and San Salvador MP said he just wants nations like ours to be treated fairly.

Is he kidding?! When has cruel and corrupt Davis himself ever treated the Bahamian people fairly?

I sure hope the newer premiership's traveling the globe pencil people have been writing down on piece paper outlining all the commitments and promises stuff is being agreed to.

Like just this past October, weren't our colony one of the hundred and thirty six countries that agreed to enforce a corporate 'minimum' tax rate of 15% and a fairer system of taxing profits where they are earned ― Yes?

The internet is huge.

No one listening to him there either.