STORM FALL-OUT TO HIT BUILDING MATERIALS: Warning that Florida’s post hurricane reconstruction will impact prices and availability in The Bahamas 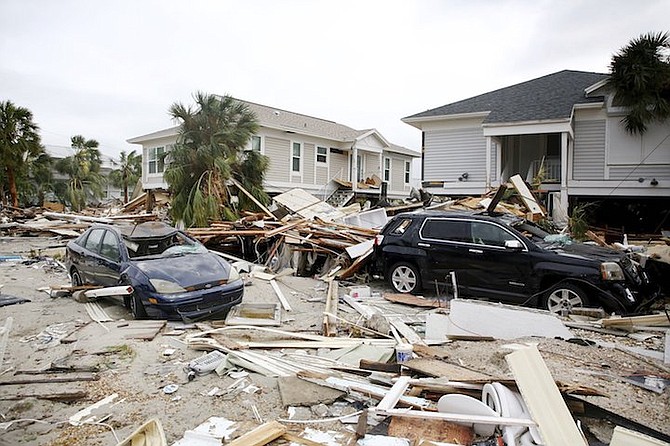 Bahamian contractors yesterday warned it is “inevitable” that Florida’s post-Hurricane Ian reconstruction will hit building material prices and availability here as local inflation was revealed to have hit 7 percent.

Leonard Sands, the Bahamian Contractors Association (BCA) president, told Tribune Business that much will depend on the extent of the Category Four storm’s devastating impact plus the nature and scale of rebuilding in the so-called “Sunshine State”.

While it was currently impossible to forecast the precise impact for Bahamian construction costs, he acknowledged that Ian’s fall-out could fuel further increases in building material prices that have otherwise “plateaued” and been relatively stable since mid-March following hikes induced by post-COVID supply chain shocks and US housing demand.

Mr Sands told this newspaper that construction supplies have increased by between 30-40 percent on average since The Bahamas and wider world have emerged from COVID-19 lockdowns, with products such as “common” lumber having doubled in price by 100 percent.

And Stephen Wrinkle, one of his predecessors as BCA president, yesterday described construction pricing as “a crapshoot” and the “Wild Wild West” due to the multiple variables that had been causing material prices and availability to change on an almost daily basis. Once Ian’s threat to Florida emerged, he added that Bahamian contractors with existing jobs had moved rapidly to secure everything they needed for completion.

The threat of renewed building material supplies increases, sparked by Florida’s reconstruction demands and associated product shortages as the state sucks up a large portion of available supplies, emerged just as the Bahamas National Statistical Institute revealed this nation’s inflation rate hit 7 percent for the 12 months to end-July 2022.

This represented an 80 basis points increase to the 6.2 percent annualised inflation rate to June, thereby confirming the prediction by John Rolle, the Central Bank’s governor, that price increases have yet to peak in The Bahamas.

“The monthly inflation rate in The Bahamas, which represents the overall change in prices, saw an increase of 1.5 percent for July 2022 when compared to June 2022,” the Institute said. “This July 2022 increase followed a 0.5 percent increase between the months of May and June 2022.” The 1.5 percent increase is the greatest month-over-month jump in the two-and-a-half years since January 2020, indicating inflation is not slowing down any time soon.

“The Consumer Price Index rose 7 percent from this same time last year. Consumers paid more in July 2022 for products such as ‘Alcoholic beverages, tobacco and narcotics’ as this major group registered a 4.8 percent increase over the same period last year. On a yearly and monthly basis, price increases were seen within the ‘Recreation and culture’ group, showing a 23 percent increase and 17.32 percent [rise] respectively.

“The ‘Hotel and Restaurant’ category also rose 3.7 percent month-over-month and 17.9 percent over this same time last year, as there was a higher demand for travel accommodation within this category compared to a year earlier. On a year-over-year basis, the category of ‘Transport’, which includes gasoline, rose at a slower pace in July than in June 2022. On a monthly basis, gasoline prices were up 3.2 percent compared with June 2022.”

The reference to narcotics likely means legal medications. And the fall in gasoline prices stems from the slow but continual decline in global oil prices. However, Florida’s post-Ian reconstruction needs may fuel further cost increases in the housing and commercial property segments locally, although Mr Sands said Bahamian contractors will have a better understanding of the impact next week once damage assessments are done in the US state.

He added that the “worst case scenario” for The Bahamas will be where building material prices go up and supply is limited; if transportation and logistics in Florida and the US eastern seaboard are impacted by road and rail access being lost; and if US-based suppliers determined to meet Florida’s needs first and place this nation and the wider Caribbean on the backburner.

Agreeing that Ian’s fall-out may disrupt six months of relative price stability, Mr Sands said: “They’ve not been increasing in many months. They went to a place and plateaued there. They’ve not been going up..... [since] somewhere between mid-March to April. We didn’t see any true increase in the month of May going to June. Things had kind of tapered off and stabilised in the marketplace.”

Mr Wrinkle, meanwhile, told Tribune Business of Ian’s impacts: “It certainly appears that any little incident affects our pricing and availability here in The Bahamas. I would be surprised if we don’t have some effects from this storm. It’s inevitable it will have some effect; to what extent, we just don’t know yet....

“I hear every contractor that has a project at the moment is trying to buy out their job and secure materials. You have to have long lead times. You can’t order stuff today and expect to get it in two to four weeks. It’s 12-14 weeks. Typically a larger project will have a turnaround time of four to six months with its material purchases.

“One has to shop around, even for two by four lumber. There’s differences with every supplier and merchant. It puts an extra burden on the contractor who has to source the materials and price them. It’s not like running down to City Lumber and getting what you need. They may not have it, and the prices may be variable. You’ve got to be careful.”

If you live on the Out Islands, prices have gone up hundreds of percent.