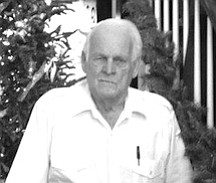 Funeral service for the late Donald Justin Sands, age 90 years of Marsh Harbour, Abaco will be held on Saturday November 1st 2014 at 12:00pm at Gladtidings Tabernacle Church, Kemp Road. Officiating will be Rev. Dion Gibson and assisted by Brother Vernon Moses. Interment will be in Ebenezer Cemetery, Shirley Street.

He was preceded in death by his mother: Florence Sands; his father: Hartley Sands; his brothers: Walter and Rannie; his sisters: Vangy, Faye, and Enis; his wife: Evelyn Candace; his children: James and Nellie; and Nellie's son/his grandson, Adam.

He is survived by his brothers: Wayde, Billy, and Robert; his children: Andrew and wife Gaye, Paul, Mellony and her husband Rod, and Nellie's husband Terry; his grandchildren: Kammie and husband Andy, Adam, Jordon (engaged to Katie), Jessyca and husband Roger, Cara (engaged to Scott), and Justin, and a host of other relatives, ministers, and friends.

In lieu of flowers donations can be given in his memory to the Kemp Abaco Sholarship Fund.