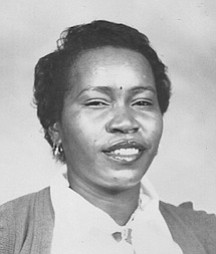 Funeral Service for the late Rosalie Ismae Burrows Knowles age 68 years of Wild Guava Ave. and formerly of Driggs Hill, Andros who died at the Rand Memorial Hospital, Freeport, Grand Bahama on Thursday, May 14th, 2015 will be held at 10:00 am at Southland Church of God, Soldier Road on Saturday, May 30th, 2015. Officiating will be Bishop Salathiel Rolle assisted by Minister Omonique Goffre and Minister Kingsley Ferguson. Interment will follow in the Southern Cemetery, Cowpen and Spikenard Roads.

Viewing will be held in the Irenic at Restview Memorial Mortuary & Crematorium Ltd, Robinson and Soldier Roads on Friday from 10:00 am to 6:00pm and at the church on Saturday from 8:30am until service time.