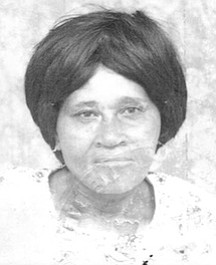 She is survived by her Sons: James Major; Son-in-law: Steven Daxon; Daughter: Sandra Daxon; 20 Grandchildren; 20 Great grandchildren; Numerous nieces and nephews; Other including: the family and residents of Culmers Alley and the Back Road Crew and other relatives and friends.