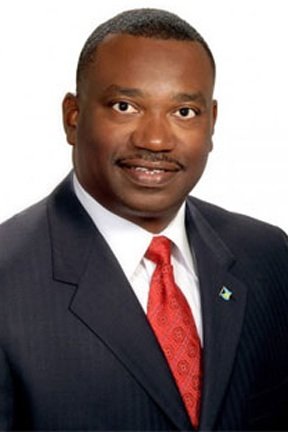 MANAGEMENT at the Bahamas Electricity Corporation’s Clifton plant continue to allow waste oil to spill out of containers and drain directly into the sea, according to former State Minister for Environment Phenton Neymour.

THE “incompetence” and “arrogance” of Bahamas Electricity Corporation Executive Chairman Leslie Miller has left the country saddled with “the highest fuel surcharge” it has ever seen, Phenton Neymour, former state minister for the environment, said yesterday.

Neymour hits back at Miller over allegations

PHENTON Neymour, the former Minister of State for the Environment with responsibility for BEC, has slammed current BEC chairman Leslie Miller for his remarks during the recent budget debate.

THE government treats Exuma “like a stepchild” according to Phenton Neymour, former FNM candidate for the island.

FORMER Minister of State for the Environment Phenton Neymour said attempts by Deputy Prime Minister Philip Davis to blame the former government for leaks found in Water and Sewerage Corporation service lines show how “desperate” the PLP has become.

GIVEN this week’s severe flooding around the capital, the government should commit a fixed amount in the yearly budget towards upgrading the country’s drainage and sewer systems, former State Minister of Environment Phenton Neymour said yesterday.

FOLLOWING government announcement that exploration wells will be sunk ahead of a referendum on oil drilling, former State Minister of Environment Phenton Neymour accused the government of “flip-flopping”.

BAHAMAS Electricity Corporation (BEC) customers could soon be facing a tariff increase, a former Cabinet minister warned yesterday, telling this newspaper that they would inevitably be burdened with bringing the Corporation out of its financial “tailspin”.

The Government was yesterday accused of “stalling for time” over its energy sector reform policies, a former Cabinet Minister arguing it was faced with either privatising the Bahamas Electricity Corporation (BEC) or increasing its rates.

FELLOW members of the dynamic generation ushered into politics in 2007 yesterday spoke out about the loss of their colleague, former Cabinet Minister Charles Maynard.

Economy and infrastructure spending to blame for loss

OUTGOING Minister of Environment Phenton Neymour has attributed the FNM’s defeat to the depressed economy and the party’s heavily criticised infrastructure development plan.