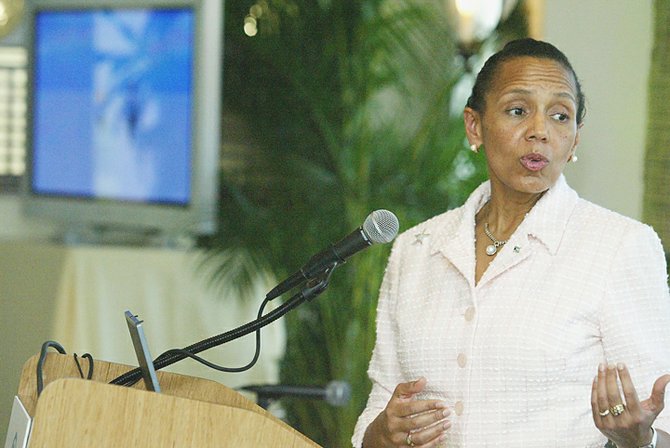 Judges 'must be held accountable'

'We are working on laws to police Internet'

FOLLOWING the Police Commissioner’s vow to pursue and bring charges against cases of “lewd” or “obscene” photos published on social media, Attorney General Allyson Maynard-Gibson says the government is currently “working on” laws regarding internet policing.

US gun checks would have helped the Bahamas

OFFICIALS in the Bahamas had hoped that the now failed proposed measure to expand gun background checks in the United States would have assisted law enforcement here to stem the tide of illegal firearms into the country.

Freedom of Information Act 'as soon as possible'

THE government hopes to have the Freedom of Information Act, which was passed in Parliament under the previous administration, in force “as soon as possible”.

AMIDST heated debate about the validity of the gambling referendum, Attorney General Allyson Maynard-Gibson claims it is an attempt to deepen democracy and is no different from the one held a decade ago.

Testimony by video to be allowed by courts

ATTORNEY General Allyson Maynard-Gibson said that legislation to allow video conferencing to be used in matters prior to criminal cases going to trial is expected to be brought to parliament shortly.

THE ATTORNEY General’s office attempted to exercise its legal power when it sent a written directive to have a firearm and ammunition case discontinued against a couple.

Court complex to go ahead?

AN 18,000-square foot court complex to be used only for family cases could move ahead after a committee, re-appointed to research and make recommendations, presented a report to the Attorney General yesterday.

The Attorney General yesterday said the Government wanted the Registrar General’s Department to match leading ‘ease of business’ jurisdictions such as Singapore, adding that plans to make key services completely electronic would bring it “into the 21st century”.