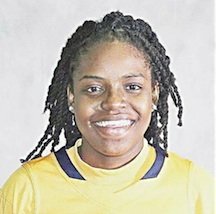 JONQUEL Jones had another successful WNBA offseason as her team captured the EuroLeague women’s championship.

Jonquel Jones one of 30 candidates for Senior CLASS Award

IN front of more than 1,000 school children from DMV-area schools, the George Washington Colonials women’s basketball team ran its winning streak to seven with a 68-52 victory over Atlantic 10 foe Rhode Island at the Charles E Smith Centre yesterday.

GRAND Bahamian Jonquel Jones and the No. 19/19 George Washington women’s basketball team have earned a No. 6 seed in the Spokane regional and will face No. 11 seed Gonzaga in the first round of the 2015 NCAA Tournament.

SOPHOMORE Caira Washington and junior Jonquel Jones combined for 31 points and 30 rebounds to lead the No. 23/24 George Washington women’s basketball team to a 65-57 victory over Atlantic 10 rival VCU at the Verizon Wireless Arena on Wednesday night.

THE long-awaited debut for Jonquel Jones and the George Washington Women’s Basketball Programme was better than advertised as she helped lead the team to a rout in her first game in a Colonials uniform.