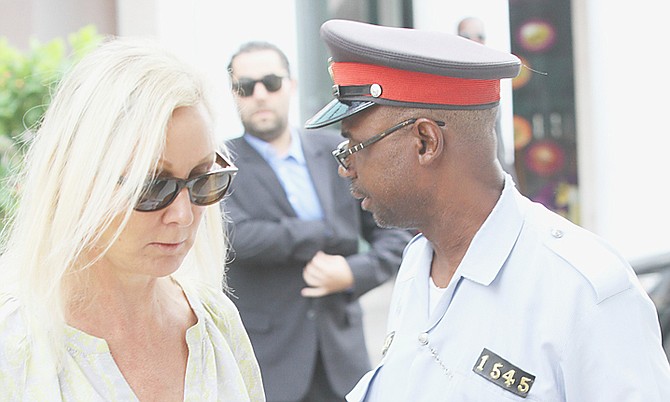 A JURY yesterday listened to three hours of closing arguments from Crown prosecutors and lawyers for accused murderer Donna Vasyli as to whether or not they should find her guilty of her husband’s stabbing death at their home in the Old Fort Bay community.

DONNA Vasyli yesterday opted out of giving testimony under oath concerning the events that led to her millionaire podiatrist husband’s lifeless body being discovered at their Old Fort Bay home earlier this year.

“ABSOLUTELY positively no” was Donna Vasyli’s response to a detective’s suggestion that she murdered her millionaire podiatrist husband, a jury heard yesterday after watching a video of the widow being questioned while in police custody.

Widow’s DNA not on knife in Vasyli murder probe

THE black-handled knife allegedly used to fatally stab a millionaire podiatrist at his Old Fort Bay home did not contain any DNA belonging to his wife, a jury heard yesterday.

MILLIONAIRE podiatrist Philip Vasyli died of a stab wound to the chest and his wife, Donna, denied having any involvement in his death when interviewed in police custody, a Supreme Court jury heard on Friday.

Vasyli trial told couple had fight the night before murder

DONNA Vasyli reportedly told a policeman she and her husband had had an argument the night before he was found dead in their Old Fort Bay home, a Supreme Court jury heard yesterday.