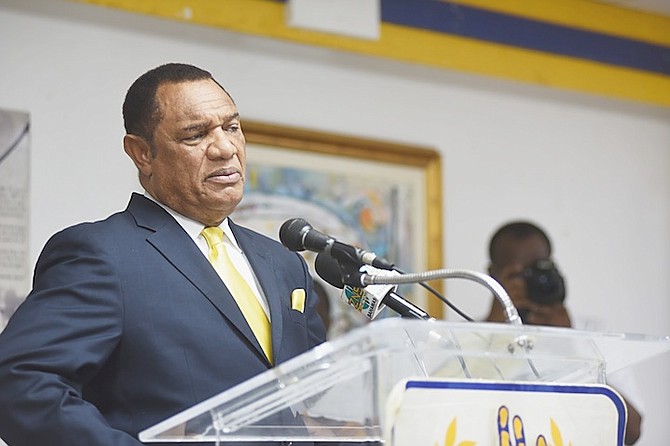 PM: NHI is about saving lives, not winning votes

THE Christie administration’s push toward implementing National Health Insurance has nothing to do with whether it could cause the Progressive Liberal Party to win the next election, but with saving the lives of the 700 Bahamians who die unnecessarily each year because they do not have access to healthcare, Prime Minister Perry Christie said.

Foreign experts being brought in by PM to examine NHI plans

PRIME Minister Perry Christie has requested that a group of healthcare experts from “Canada, United Kingdom and the United States” come quickly to The Bahamas to examine his efforts on National Health Insurance.

Officials in discussion with US over crime in the Bahamas

OFFICIALS are engaged in “certain discussions” with US diplomats about crime and the country’s gang problem, Prime Minister Perry Christie said yesterday.

PRIME Minister Perry Christie was forced to again defend himself against allegations of a conflict of interest connected to the country’s oil exploration industry over which he castigated the Free National Movement for using “smear politics” to “wantonly” assault his integrity.

PRIME Minister Perry Christie insisted yesterday that his administration’s roll out of National Health Insurance won’t cause job losses or destabilise the economy as he defended his confidence in consultant Sanigest Internacional and promised a ramping up of efforts to educate Bahamians about the proposed scheme.

Call to build in elevated areas

PRIME Minister Perry Christie said the government cannot declare certain areas in the storm-affected Family Islands as no build zones unless it passes legislation in Parliament to recognise those areas as vulnerable.

INSIGHT: Time for change - The PLP has been airing its dirty laundry in public

SENIOR members of the Progressive Liberal Party (PLP) spent much of last week swimming against the tide so to speak, acknowledging that the country is in a mess, that the party had made many lofty promises that it could not keep in order to win the 2012 general election and that many government MPs are poor performers who should be cut like dead weight.

PM ‘desperate’ for NHI to mark his legacy

A NOTED surgeon has insisted that Prime Minister Perry Christie is desperate to create and leave behind a legacy when he took over leadership of the committee appointed to plan and execute the implementation of National Health Insurance in January 2016.

PM: I won’t be forced out

PRIME Minister Perry Christie spoke frankly to party supporters yesterday, telling a crowd that he would not allow anyone to put a “proverbial political gun” to his head telling him when to demit his post.

Mr Phillip Galanis was never a cabinet minister sorry get the facts right.