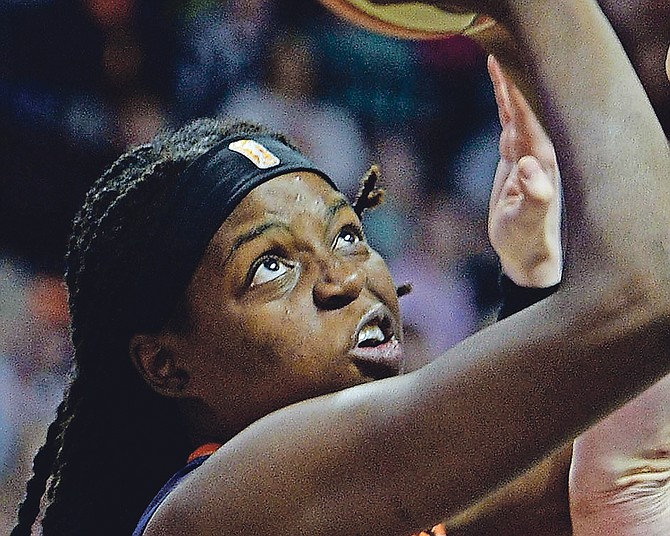 Jonquel Jones and Sun to be live streamed on Twitter

BAHAMIAN basketball fans will have even more opportunities to see Jonquel Jones and the Connecticut Sun live in action this season through social media outlets. The WNBA announced yesterday 20 games that will be live streamed on Twitter during the 2

JONQUEL Jones looks to continue her momentum from the WNBA to the Women’s Chinese Basketball Association.Her Shanxi Flame got the season off to an impressive start with a 92-52 win over Heilongjiang in the season opener yesterday.They got out to a 24

FACED with their fifth game in 11 days, Jonquel Jones and the Connecticut Sun were unable to keep pace in their home finale as the WNBA playoff race closes out the regular season. The Sun suffered a 96-83 loss to the Chicago Sky Friday night in thei

It's another double double for All-Star Bahamian Jonquel Jones

By RENALDO DORSETTTribune Sports Reporterrdorsett@tribunemedia.net Jonquel Jones continues her post All-Star break momentum and tallied her 13th double double of the season in another win for her Connecticut Sun.Jones finished with 14 points, 13 rebo

Jonquel Jones continues to make Bahamian basketball history with each passing milestone.The second-year forward was one of 10 players selected by fans, current players and a select media panel as a starter for the 2017 WNBA All-Star game presented by

WEDNESDAY was a milestone day for Jonquel Jones and the Connecticut Sun. Jones was named the WNBAs Eastern Conference Player of the Month and the Sun followed with their most lopsided win of the season as they continue to progress in the Associated

JONQUEL Jones continues to produce at an All-Star level and her Connecticut Sun have followed suit as one of the hottest teams in the WNBA.

JONQUEL Jones of the Connecticut Sun and Candace Parker of the Los Angeles Sparks were yesterday named the WNBA’s Eastern and Western Conference Players of the Week respectively, for games played June 12-18.