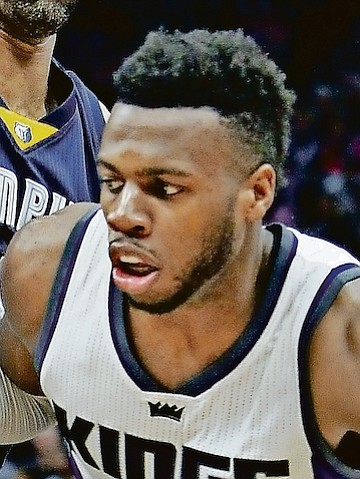 Buddy Hield’s tour of community outreach efforts this summer shifted to Grand Bahama with “Dream Week.”Dream Week began July 31 with a two day camp at both the Jack Hayward Gymnasium and Pinedale basketball courts. Following a day off, the action ret

Buddy Hield’s busy offseason will include several stops back home for a series of community outreach initiatives.First on the schedule will be the inaugural Buddy Hield Workshop and Tournament today and tomorrow at the Kendal Isaacs Gymnasium.The wor

BUDDY HIELD STRUGGLES FROM BEYOND THE ARCH IN NBA SUMMER LEAGUE

BUDDY Hield struggled from beyond the arch in the first two games of the 2017 Las Vegas Summer League but the sharpshooting guard improved in his latest outing.Hield scored 22 points, including 6-9 from three-point range in the Kings’ 95-92 loss to t

Buddy looks to take on leadership role with the Kings

IN just his second NBA season, Buddy Hield is looking to take on a leadership role with the Sacramento Kings and represent the “culture change” the franchise is eager to make.Hield turned down an opportunity to appear at this week’s Basketball Withou

Buddy Hield weighs in on basketball without borders

THE Bahamas is set to become the focus of the international basketball community as the NBA hosts its vaunted Basketball Without Borders programme in the capital.

BUDDY Hield’s stellar play during his rookie season was officially recognised by the NBA as the league began to dole out its end-of-year awards yesterday.The Grand Bahama native and Sacramento Kings guard was named to the 2016-17 NBA All-Rookie First