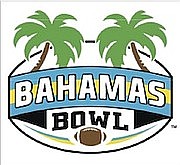 THE Makers Wanted Bahamas Bowl committee and its stakeholders continue to foster a mutually beneficial relationship between the event and its host country.

Bahamas Bowl all set for December 20

THE bowl season will begin in the Bahamas this year as the 2019 Makers Wanted Bahamas Bowl has been set for 2pm ET on Friday, December 20.

Bahamas Bowl players are selected in the NFL Draft

TWO student athletes who participated in last year’s Makers Wanted Bahamas Bowl joined three other alumni from previous years as they were selected during the 2019 NFL Draft, held April 25-27 in Nashville, Tennessee.

The Bahamas Bowl’s future will be determined by its promotional value and the number of “heads in beds” it generates, a Cabinet minister has confirmed.

WITH the Prime Minister’s Cup displayed between the two of them, the head coaches from both the University of Toledo Rockets and the Florida International University Panthers say they only have one thing on their minds - to hoist the prestigious trophy after today’s Makers Wanted Bahamas Bowl.

BOWL week has officially kicked off in the Bahamas.

IN its eighth official edition, the Bad Boy Mowers Battle 4 Atlantis tournament has established a reputation as an event loaded with high-calibre talent playing against the backdrop of a tropical paradise.