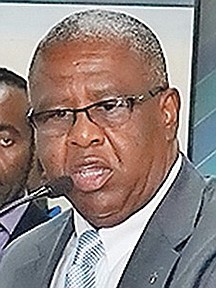 AIRPORT operations on several Family Islands were severely affected yesterday after more than a dozen airport employees refused to show up to work in protest of unresolved workplace grievances.

AIRPORT operations on several Family Islands were severely affected today after more than a dozen airport employees refused to show up to work in protest of unresolved workplace grievances.

Airport bidders called on to give credentials

The Government will require interested bidders on airport upgrades collectively worth near $400m to present their credentials by September’s second week, its top aviation official revealed yesterday.

The government’s repeated failure to settle a 60 year-old grievance has put the planned North Eleuthera airport expansion in peril from potential legal action by over 3,000 “common” land owners.

A Bahamas-based investment bank has been selected to arrange up to $140m in financing that will fund multiple airport infrastructure upgrades throughout the Family Islands.

The bidding process to select a contractor to build Long Island's new international airport, which will have runway 2,000 feet longer than the present version, will be launched by January 2021 at latest.

‘No difficulties’ over $150m airport raise

The government “sees no difficulty” in securing private financing to kickstart the bulk of its “over $150m” Family Island airport redevelopment ambitions, a senior official told Tribune Business yesterday.

'North of $120m' offer for Out Island airports

The government’s aviation chief yesterday said he has received a Bahamian-generated offer to provide the “north of $120m” financing needed to kickstart overhauls of the major Family Island airports. Algernon Cargill, director of aviation, told Tribu

The government’s decision not to proceed with the Nassau Flight Services (NFS) privatisation is no reflection on the two final bidders’ quality, a top aviation official revealed yesterday. Algernon Cargill, director of aviation, confirmed to Tribune

The government’s top aviation official yesterday said it was targeting December 16 as the date when Marsh Harbour’s airport will be ready to receive international flights from the US. Algernon Cargill, director of aviation, told the Bahamas Out Isla

A senior official yesterday said the government “could sign tomorrow” with multiple offers as it seeks to raise $100m for the overhaul of four prominent Family Island airports.Algernon Cargill, director of aviation, told Tribune Business that financi

Migrants told to stay away because of disease fears

Concerns are being voiced that the government is ending Abaco’s supply of free gasoline prematurely given that Hurricane Dorian wiped out the island’s payments system.Algernon Cargill, pictured, the joint Dorian relief and redevelopment co-ordinator

Just two bidders remain in the race to acquire Nassau Flight Services (NFS) ahead of a key presentation next Tuesday to the committee charged with selecting the best offer.Algernon Cargill, pictured, director of aviation, confirmed yesterday to Tribu

Only one in ten taught to swim

BAHAMAS Swimming Federation president Algernon Cargill wants a national programme to teach people how to swim, saying government research shows fewer than 10 percent of Bahamians can swim to save their lives.