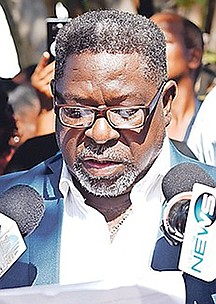 WSC staff told to go back to work

STAFF at the Water and Sewerage Corporation have been ordered to return to work until the country’s top judge rules on whether union members have a right to strike. Dwayne Woods, president of the Bahamas Utilities and Allied Workers Union (BUSAWU),

Water strike to go ahead

MEMBERS of the Bahamas Utilities Services and Allied Workers Union (BUSAWU) will continue their strike despite being notified by Labour Minister Dion Foulkes that he has referred the matter to the Industrial Tribunal. WSC officials said workers par

Woods calls for removal of Gibson and plans ‘full strike’

THE unions representing the managers and line staff at the Water & Sewerage Corporation called for the removal of WSC executive chairman Adrian Gibson and for the corporation’s executives to meet with both unions to address their grievances during day one of a joint strike.