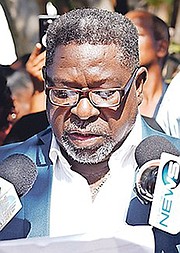 The Water & Sewerage Corporation's line staff union must hold a new election after the Supreme Court found "the overall fairness" and integrity of the first leadership ballot was "called into question".

Justice Ian Winder, in a September 16 ruling, agreed with John Pinder, director of labour, that Dwayne Woods, the Bahamas Utilities Services & Allied Workers Union (BUSAWU) president, had "interfered with, and called into question the integrity", of the June 30, 2020, vote to elect new officers for the union.

Mr Woods and his team were said at the time to have won a resounding victory, but Justice Winder upheld Mr Pinder's decision - in his dual capacity as registrar of trade unions - not to certify the election as compliant with the Industrial Relations Act after two major irregularities were brought to his attention.

While the Department of Labour's Family Island offices had been designated as the only lawful places where the BUSAWU officers' election could be held, the ballots on Exuma were instead sent by Mr Woods - in his capacity as the union's incumbent president - to the island administrator's office on the basis that members preferred to vote there.

Then further concerns over the election's integrity emerged when it was discovered that the back of all ballot papers had been stamped with the election logo of Mr Woods and his team of candidates for offices that included vice-president, secretary general and treasurer.

"On the morning of the election, June 30th, 2020, the designated officer at the Department of Labour's office in Exuma, Leslie Curtis, notified the registrar of trade unions that he was not in receipt of any of the union's ballots," Justice Winder recorded of the day's events.

"[Dwayne] Woods says the polling place in Exuma was changed by him as the members in Exuma preferred using the island administrator's office instead of using the Department of Labour's Exuma office."

As for the second infraction, Justice Winder added: "The registrar says that on the day of the election, he received multiple calls from designated officers, from both New Providence and the Family Islands, who expressed member concerns about the integrity of the poll as they recognised the back of each ballot was stamped with an election team symbol. This symbol was the symbol of Woods' team.

"On July 2, 2020, a [rival] presidential candidate wrote to the registrar with concerns about an election team stamp being placed on the back of the ballot. He thought that it was unfair and that it gave that election team an advantage."

As a result, Mr Pinder met with all presidential candidates on July 13, 2020, explaining that these irregularities were why he was not going to certify the poll as compliant with the Industrial Relations Act. This prompted Mr Woods and his team to initiate a Judicial Review action in a bid to uphold the results and prevent a new election from being held.

The Attorney General's Office, acting for Mr Pinder, challenged the Judicial Review approach on the basis that Mr Woods and his team, represented by Wayne Munroe QC, had not first explored alternative legal avenues.

Justice Winder agreed, finding that the incumbent president and his team should have first appealed to Dion Foulkes, minister of labour, to use his powers under the Industrial Relations Act to certify the poll rather than go the Judicial Review route given that this is "normally a remedy of last resort".

He rejected Mr Woods' assertion that a What's App exchange on July 8, 2020, between himself and Mr Foulkes amounted to such an appeal request given that Mr Pinder did not render his decision not to certify the vote until five days later.

Mr Woods, in the exchange, accused Adrian Gibson, the Water & Sewerage Corporation executive chairman, with whom he has repeatedly clashed of trying to intervene in the union's election. He told Mr Foulkes: "Thanks Bro. Adrian is attempting to interfere."

This issue was never raised again by Justice Winder, who said the case presented by Mr Woods and his officers' team was that Mr Pinder was guilty of "irrationality or unreasonableness" in refusing to certify the election results and his team's success. They added that even if the five Exuma votes, which were all cast in favour of rivals, were excluded they would still have won.

However, Mr Pinder and the Attorney General's Office argued that the placement of Mr Woods' team stamp on the back of all ballot papers was "used to influence voters and denied all candidates an equal and unbiased election process".

As incumbent president, Mr Woods was responsible for preparing the ballots, and Mr Pinder and the Government argued: "The placement of an election team stamp on the back of each ballot was a significant irregularity, and there is no way to quantify how the results were or were not affected, hence the influential ballot substantially distorting the election.

"It is humbly submitted that this demonstrates unfairness on the part of the first applicant [Mr Woods] who wanted to avoid the probability of an objection raised to the influential ballot. The first applicant used his position as president to unduly influence voters by placing his election team stamp on the back of each ballot," they continued.

"The Department of Labour doesn't permit any campaign paraphernalia around any designated voting area, as guided by the parliamentary election procedures, in order to maintain electoral fairness. The first applicant attempted to circumvent this procedure.

"In other words, by the first applicant's conduct in changing the location of the poll in Exuma in contravention of the Industrial Relations Act and further by placing his election team stamp on the ballot, it is humbly submitted that he has interfered with and called into question the integrity of the election process and therefore the poll cannot be certified in these premises."

Justice Winder said that while it was hard to determine where the union's involvement in running the election ended, and the Department of Labour's involvement began, but said the union and Mr Woods were responsible for producing the ballot papers.

He added that the decision not to certify the vote was not unreasonable, as alleged by Mr Woods and his team, and concluded: "Whilst the five votes in Exuma would not have affected the overall outcome of the elections it cannot be said that issue, having regard to the authorities, is a trite one.

"When considered in conjunction with the issue of the applicants' marking of the ballots with their team stamp, the overall fairness of the election is called into question." Dismissing the Judicial Review action by Mr Woods and his team, Justice Winder gave the go-ahead for a new election to be held.