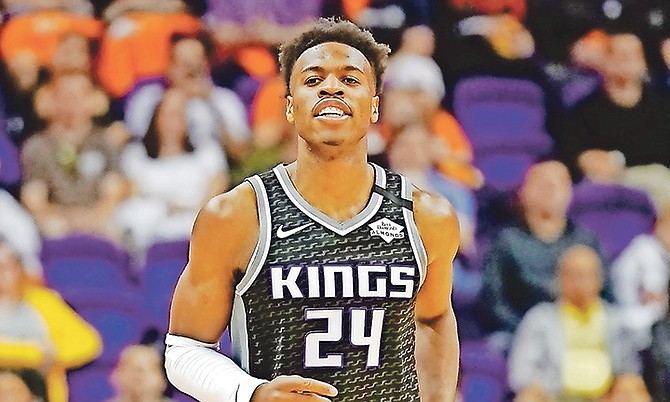 Buddy Hield’s role has fluctuated during his tenure with the Sacramento Kings and many pundits expect the sixth year guard to take on a reserve role to begin the 2021-22 campaign.

Jasrado Chisholm The Tribune’s Senior Male Athlete of the Year

JASRADO “Jazz” Chisholm’s series of career milestones in 2020 was highlighted by becoming just the seventh Bahamian to play Major League Baseball. The historic feat earned him The Tribune’s Senior Male Athlete of the Year.

Buddy: ‘I have no regrets’

CHAVANO “Buddy” Hield addressed the media for the first time since the regular season finale and the outspoken Sacramento Kings guard sought to clarify.

‘BUDDY’ HIELD AND KINGS ‘ARE ALL ON THE SAME PAGE’

THE growing speculation continues to mount about Chavano “Buddy” Hield’s future with the Sacramento Kings organisation after different messages emerged from the franchise’s head coach and top ranking executive.

The relationship between Buddy Hield and the Sacramento Kings appears to be unstable as the franchise continues its offseason.

THE NBA restart has gone through two of three scrimmages at Wide World of Sports Complex in Orlando, Florida, and both Bahamian players at the NBA “clean site” appear ready to perform at a high level once the games count toward the record books.

‘Bubble Buddy': Chavano Hield speaks to media about life in the NBA bubble

Chavano “Buddy” Hield spoke to the media for the first time since his return to practice with his Sacramento Kings and discussed his experience with COVID-19 and life in the NBA bubble.