CONSUMERS faced with inflationary costs say they are doing their best to cope.

‘No future’ for Freeport’s Bazaar which nobody wants

THE Grand Bahama Chamber of Commerce president says he is not surprised fires continually happen at the International Bazaar because vagrants have moved in and no one wants to take full ownership of the “derelict” property.

PREVENTION OR PROSECUTION?: PM says priority must be tackling causes of crime not just catching criminals

THE Leader of the Opposition has criticized government on its late fiscal snapshot report and warned of a “double whammy” of high taxes and higher priced goods.

THE Bahamas Humane Society has announced it is currently unable to accept stray or owner surrendered animals. This will continue to be the case until BHS is able to find homes for the animals it now has leaving additional room to accommodate new intake.

It was reassuring to hear the Prime Minister single out the ideological shift of the post-1992 era as the most important challenge to the development of this country. It hopefully signals an emphasis on reversing the failed policies of that era and shifting us back toward genuinely progressive economic policies.

TA Thompson repairs to be complete ‘by start of term’

EDUCATION Minister Glenys Hanna Martin said yesterday repairs at T A Thompson Junior High School will be completed in time for the start of school on August 29.

A San Salvador businessman is beating COVID-19 economic slump with the Small Business Development Centre (SBDC) $20,000 funding he received in 2019.

In the first part of this commentary - published last week - the conclusion was reached that the great ideals, set out in the 1973 Treaty of Chaguaramas (the CARICOM Treaty) and its revision in 2001, remain unfulfilled. But does this reality mean that, as the CARICOM project reaches its 50th anniversary next July, it has reached the limits of regional integration?

Why do we make things so difficult?

DOUBLE talk — rubbish or what? Can’t OPM Health get on the same page and stop talking so much garbage of possibly when the Wear Mask Regulation will be cancelled.

A drop in the ocean of our sunken treasures

The Treasure hunter salvaging the wreck of a sunken Spanish Galleon is set to open their museum on Monday, showcasing what they have found in Bahamian waters to date.

An underwater explorer has pledged not to sell or “split up” the valuable gems and historical artifacts it is recovering from the wreck of a centuries-old Spanish treasure galleon in Bahamian waters.

Sales beginning to rise ahead of school return

LOCAL businesses say they are beginning to see sales ramp up as customers shop for supplies in anticipation of the opening of schools in the coming weeks.

The Prime Minister last night said he had implored Gold Rock’s owners to “spend every effort” to resolve their differences with the Grand Bahama Port Authority (GBPA) and its affiliates despite signs the impasse cannot be resolved.

FRONT PORCH: Getting away with murder and other crimes?

THE multiyear COVID- 19 pandemic exacerbated a perennial criminal justice problem in The Bahamas and many other jurisdictions: the inability to prosecute criminals in a timely (swift), certain and fair manner, encapsulated in the coinage, Swift Justice, the concept of which has its origins in the thinking and research of the late American criminologist Mark Kleiman.

The Water and Sewerage Corporation’s general manager yesterday said the utility is selling 44 percent more water than a decade ago despite a 12 percent production fall-off over the same period. 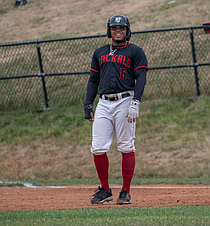 TODD Isaacs Jr and the New Jersey Jackals also hope to reverse their fortunes in ...

Visitors to a cruise line’s Bahamian private island are forecast to increase by more than 427,000 per year once two piers are constructed to allow its vessels to properly dock, it has been revealed.

The Opposition’s finance spokesman yesterday voiced concern that Bahamian merchants and families could miss out on a significant inflation offset if no Back-to-School ‘VAT-free holiday’ is held this year.