A GAS tanker sank off the coast of New Providence on Friday after it was “rear-ended” by a 207-foot super yacht.

THE Office of the Attorney General will investigate the environmental liability attached to a collision at sea that resulted in a gas tanker sinking off the coast of New Providence.

SWIMMERS continued their success in the pool while athletics opened competition at the inaugural Junior Pan American Games in Cali, Colombia.

CRYSTAL Cruises, in conjunction with the Ministry of Tourism and Aviation, will host a homeporting inaugural ceremony in Nassau to celebrate the first sailing of the Crystal Serenity on Saturday.

THE NEWLY elected councillors at the inauguration ceremony.

NINE elected local government councillors of the City of Freeport District Council were officially inaugurated and presented their certificates on Wednesday evening on Grand Bahama.

AFTER an exciting draft day over the weekend, coach Denykco Bowles said they are all excited about the launching of the International Basketball Academy’s inaugural Grassroot Youth Basketball League next weekend.

SOME of the country’s top junior and senior athletes will be in Grand Bahama competing in the Fast Track Athletics’ inaugural Spring Fling Invitational this weekend.

The inaugural visit of the Wonder of the Seas to Nassau earlier this month. 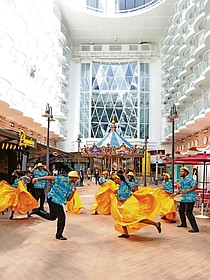 BAHAMIAN performers aboard the Wonder of the Seas during its inaugural cruise to Nassau. Photos: ...

Adventure of the Seas set for inaugural voyage from Nassau

A COMIC'S VIEW: The epidemic of fake news

I recently had a chance to have a candid and very informative conversation with Dr Duane Sands on ‘Talking Heads’ on Kiss 96 FM, a talk show I co-host with my better half Mary Jane, who you all know from mid-days on our sister station Y-98.

MEMBER of Parliament Wayde Watson said one of the alternative ways of helping to deter some of the crime in his inner city community is to stage their inaugural Bain and Grants Town Summer Games.