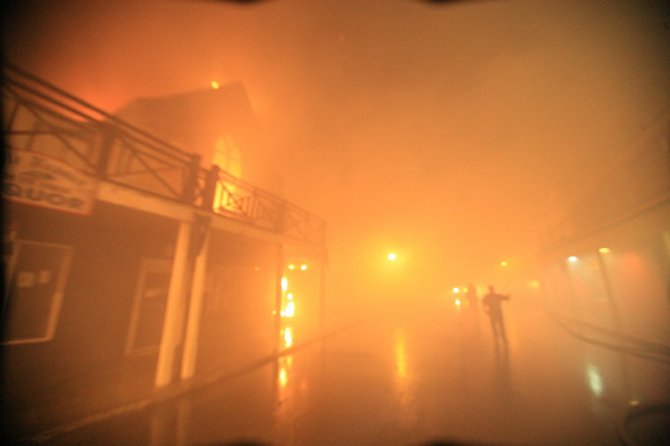 JUST months after the one decade anniversary of the September 2001 Straw Market fire that destroyed a number of buildings on West Bay Street, downtown has been forced to relive another blaze that destroyed three structures and extensively damaged another yesterday morning.

The aftermath of the fire’s destruction caused a portion of West Bay Street to be blocked off and drew the attention of scores of onlookers who stood in shock that yet another fire had occurred in downtown Nassau. On Valentine’s Day this year a blaze demolished the Betty K Building and a block of Bay Street, causing over $100 million in damage.

Royal Bahamas Police firefighters were called to West Bay and George Streets early yesterday to battle a fire that reportedly started around 2am in the straw market and eventually spread and destroyed the neighbouring structures — SunTime Ltd, Da Balcony Night Club and the historical Pompey Museum of Slavery and Emancipation.

After a decade of recovering from the destructive straw market blaze in 2001, the national treasure is once again on the drawing board in the hope that the structure could be restored to its former glory.

Dr Gail Saunders, founder of the 19-year-old National Museum under the Bahamas Antiquities, Monuments, and Museums Corporation, expressed her unhappiness about the tragic event, fearing the potential loss of hundreds of artifacts and history.

“I’m very upset about the fire. I can’t even begin to explain it. This is the second time in how many years?”

When asked if she knew how the blaze started, Dr Saunders said: “No. We were told that there was some uncollected garbage in the straw market and that it may have started from there. We really don’t know for sure.”

She could not confirm what was lost and salvaged as firemen were still extinguishing the last of the blaze, but she said a team would be doing assessments.

Mr Maynard in his response to the tragic outcome shared similar sentiments to that of Dr Saunders about yesterday’s destruction. “It’s really devastating for something like this to happen and right now we’re waiting for the fires to be extinguished completely before a proper assessment is done.” He added that “engineers will also be doing assessments to see whether or not the structure can be restored and we’ll go from there.”

He continued his walkabout of the area before speaking to distraught straw vendors who claimed to have lost all their merchandise – their only livelihood – to the flames.

“Thankfully,” he told them, “no lives were lost.” He said that “the items, the buildings, they can always be replaced.”

The Tribune spoke with Insp Norman Bain, Chief Fire Officer of the fire department, at the scene. He confirmed that the blaze started from the straw market before moving to the museum and the two-storey building housing SunTime Shop and Da Balcony Night Club.

Speaking about the sequence of the unfolding event, he said: “We got the call around 3am this morning, approximately around that time and we responded to the scene with our equipment from the police headquarters.”

Even though they responded to the blaze with six trucks, Insp Bain thanked a number of agencies that “readily” gave assistance when it was needed.

“As the fire progressed, we were assisted by personnel from the airport fire station, the Bahamas Electricity Corporation, the Royal Bahamas Defence Force and the Water and Sewerage Corporation. They readily loaned us their resources and they enabled us to really halt this fire to the state you see right now from spreading to neighbouring structures and causing further damage.”

The fire chief said the blaze also reached the roof of the Peet Building on George Street because of the wind and flying debris. He could not, however, say if the blaze was as a result of arson. “We’re still investigating it” was all he would say.

Store manager of SunTime Shop Ltd, Tamiko Stubbs unlocked the doors to the store to survey the water and fire damage inside. “Everything was completely destroyed,” he said. “That’s hundreds and thousands of dollars gone.”

While the manager inspected what remained of the store and as officers continued to hose down smouldering hot spots nearby, a retired US firefighter and cruise passenger on vacation, praised the department’s accomplishment in containing and extinguishing the blaze under such severe circumstances.

“It is phenomenal that they were able contain a fire that easily ripped through the woods and shingles on those structures. It could’ve spread further and caused so much more damage with the wind and I really commend how they were able to incorporate the sea water for tackling the fire. It was really effective and commendable.”

He added that the “people of the Bahamas should be very proud of how well the fire department did today. They did a hell of a job. For these type of structures, one spark was all it really took to cause an incident and the department, they did a terrific job.”

Prime Minister Hubert Ingraham said the government “will move expeditiously” to restore the part of downtown that was ravaged by fire.