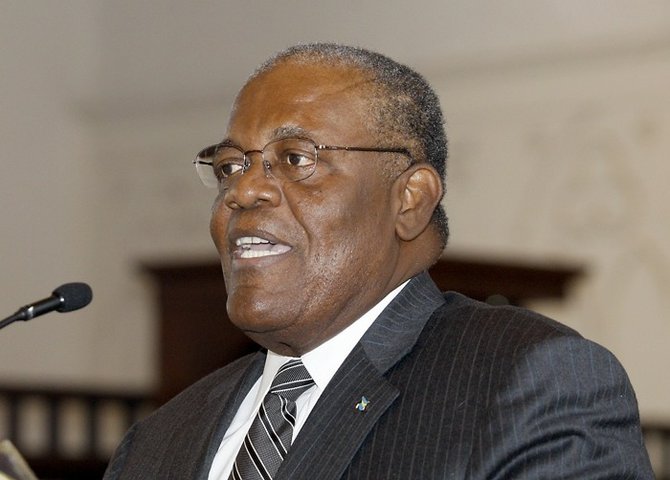 THE government has pledged to continue tackling the "critical" lack of affordable housing in New Providence by reclaiming shanty towns.

Speaking yesterday at the groundbreaking and renaming ceremony for the former shanty town known as Mackey Yard, Prime Minister Hubert Ingraham said the new subdivision that will replace it, represents his administration's commitment to support Bahamians seeking to own their own homes.

"There is a critical unmet and overwhelmingly urgent need for affordable, safe housing," he said, adding that the government is on target to meet its 2007 pledge to create 600 affordable homes.

The Ministry of Housing has already constructed 470 houses and sold 237 serviced lots in this current term, with an additional 180 houses now under construction in New Providence, Grand Bahama and Abaco, he said.

Less than a year ago, the Boxing Day Mackey Yard fire destroyed more than 100 wooden shanties, leaving hundreds homeless. Now, the area will become home to 53 Bahamian families, and be known as Strachan Hill Estates.

Mr Ingraham said the development of the 7.97 acre Mackey Yard plot into 53 lots will cost about $3.9 million.

Like Mackey Yard, other areas throughout the Bahamas are occupied by Bahamians and non-Bahamians without proper title. He said the government is systematically moving to reclaim this land.

"We have had to undertake massive exercises here in New Providence, especially so in Carmichael area, in Abaco, Andros, North Eleuthera, Grand Bahama and elsewhere around the country to make title available to families some of whom, in unauthorized occupation, developed commercial enterprises - others constructed residences on government-owned land," he said.

Housing Minister Kenneth Russell said the regularisation of squatters involves giving Bahamians a concessionary rate, in the case of Mackey Yard $3.40 per sq ft, to purchase a lot.

Mr Russell explained that those Bahamian squatters who have built homes on government land which is up to the building code will be allowed to purchase property from the government, following which, they will receive title to the land.

Those homes that are not up to code, he said, will be required to renovate the building to government standards or demolish them to start over.

Despite much media speculation, Mr Russell said "the Ministry of Housing does not have the authority to sell a house or a lot to a non-Bahamian".

"It has been made clear," he said, "that the assistance offered is only to Bahamians."

Twenty-two contractors have been hired to develop the Mackey Yard property, said Mr Russell, with construction on the property already underway and completion expected within the next 4-6 months.

Just as squatter settlements developed over time, it will take time to eliminate them, said Mr Ingraham.

"We will get the job done of reclaiming public lands and where circumstances require regularization of title, we will do the necessary," he said. "Today it's Mackey Yard; earlier it was Pride Estates III, it will soon be Fire Trail Road, Sugarman Estate in Fox Hill and Dignity II on Carmichael Road."