THE Bahamian tourism industry is reaping "huge psychological value" from visitor numbers tracking 10 per cent ahead of 2011 and on target to pass the six million mark for 2012, with April the first month "solidly ahead" of pre-recession comparatives. 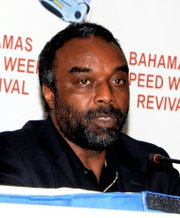 Vincent Vanderpool-Wallace, minister of tourism and aviation, yesterday told Tribune Business that total tourist numbers for March and April 2012 - stopovers and cruise business combined - were expected to match the more than 10 per cent growth rate achieved during the first two months this year.

And, more importantly, Mr Vanderpool-Wallace said per capita visitor yield or tourist spend had "absolutely" increased, a key factor being the return of the more lucrative group business that deserted the Bahamas in 2009-2010 during the height of the global recession.

Confirming that the Bahamas attracted 5,585,995 visitors to its shores in 2011, the lion's share being some four million cruise passengers and seaborne visitors, Mr Vanderpool-Wallace told Tribune Business that should the Bahamas "continue this rate of growth" seen in January-February, it would pass the six million number for the first time ever in 2o12.

With March and April expected to match the 10 per cent visitor growth rate, Mr Vanderpool-Wallace said the Bahamas only needed to maintain a 7.4 per cent rate of increase for the remaining eight months to pass the "unprecedented" six million mark for 2012.

Noting that the return of the Bahamian hotel industry's group business was "a substantial part" of the increase in visitor arrivals, Mr Vanderpool-Wallace told Tribune Business: "We fully acknowledge that part of the reason why business fell off so much was because of the group business.

"The group business is the highest spending book of business by far. These are people we know who are high performing executives in the companies they are coming from. They have high disposable incomes, and everything is paid for by the company. The company does not want to skip on anything, so they reserve a great deal."

When asked by Tribune Business whether the return of group business had increased per capita stopover yields and spending, the most critical determinant of the hotel and tourism industry's health, Mr Vanderpool-Wallace replied: "Absolutely. We're going to see more and more of that, as more comes along.

"When group business comes back, tourist spending comes back. That's why we're in the tourism business. The hotels and tourists come back, with very strong room rates and overall spending."

Along with visitor spending, another critical indicator of the Bahamian hotel/tourism industry's current performance is how it measures up against pre-September 2008 comparisons. That marked the start of the real recession, as far as the Bahamas was concerned, following the Lehman Brothers crash and subsequent fall-off in resort bookings, which led to mass lay-offs in the sector.

"From what we're seeing so far there's no reason not to be optimistic," Mr Vanderpool-Wallace told this newspaper. "I think we'll assess that over the next 60 days, probably the end of April.

"There is a strong feeling that April will be the first month where we're solidly ahead of the club, but that remains to be seen."

When it came to the Bahamas' cruise tourism business, Mr Vanderpool-Wallace said this nation was now enjoying a "solid" 7.5 per cent growth, following three years in which it had seen "unprecedented" increases of 15 per cent.

Explaining that it was impossible for any business to maintain such an expansion rate year after year, the minister told Tribune Business: "The rate of growth we've seen in cruise is so unprecedented.

"What used to be 15 per cent increases is now 7.5 per cent. The volume is so high that the industry cannot increase by much higher than that. It's good, solid growth on top of what we've seen in the last three years, which has been unprecedented. Many companies would be delighted with that [7.5 per cent] rate of growth."

Mr Vanderpool-Wallace said "a substantial part" of the cruise passenger growth related to the dredging of Nassau Harbour, which opened it up to the world's largest cruise ships. Agreements were also negotiated with the major cruise companies where they agreed to deliver minimum increases of 250,000 passengers for each of three successive years.