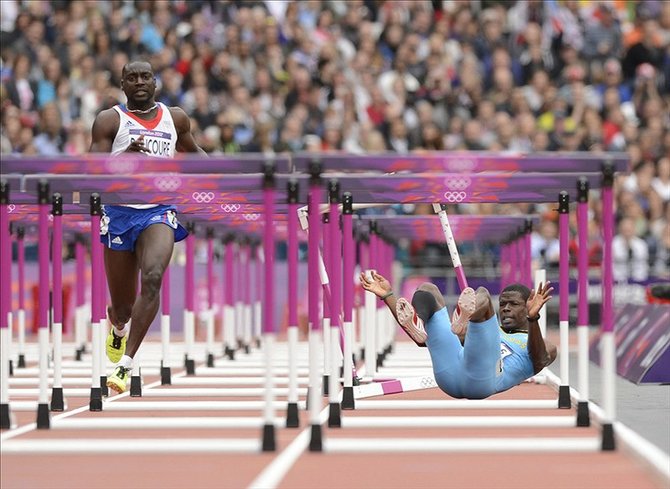 LONDON, England — In the “blink of an eye,” Shamar Sands made one mistake that caused him a chance to regain his prominence in the men’s 110 metre hurdles on the global scene.

Battling back from a hamstring injury that sidelined him for all of last year, Sands actually sat in second place in his heat of the men’s 110 metres hurdles at the 2012 Olympic Games on Tuesday morning at the National Stadium.

But going over the sixth of the 10 hurdles, Sands’ trailing leg clipped the top, he stumbled a bit and wasn’t able to maintain his composure in the race. After going over the eighth bar, he just dropped down the next two as he walked through them before he finished off with a final trod to the line.

However, it didn’t matter as he was already disqualified and Cuban Orlando Ortega took the tape in 13.26 for the third fastest qualifying time.

Still stunned about his inability to get over the hurdle, Sands said he’s not even sure what happened.

In the most technical race on the track, Sands said one has to be at their best at all times, or they could end up with the same fate as he did.

“It could just happen in a blink of an eye. That’s what happened,” he said. “It’s all good.”

Sands, the 27-year-old national record holder, remembers the good old days when he reached the semifinal in his debut at the Olympics in 2008 in Beijing, China. He was on target for an encore, but it all came down to that one unfortunate incident going over the seventh hurdle.

“I give God all the credit and all the glory,” he said. “It was one of those things. I still lift my head high.”

If he can maintain the fitness level that he’s enjoying now, Sands said he expects to be at the 2013 IAAF World Championships in Moscow, Russia where he expects to redeem himself.

“I know these things keep happening in my career, but I guess it isn’t my time yet,” he said. “I just have to keep trotting. My time will come soon.”

As for now, even his coach Dianne Woodside was speechless about what happened here.

“He looked really good. I really thought he was going to come through,” said Woodside, whose role here is the women’s head coach for Team Bahamas. “He was on his way to getting into the semifinal. I don’t know what happened.”

Woodside, who was celebrating her birthday, said she was shocked.

“I will talk to him and see what happened, but I’m lost for words,” she said. “I can’t believe it. He’s been working really well. He looked good coming out of the blocks, he cleared all of the hurdles until he trapped on that one.”

The good thing, according to Woodside, was that he was still upbeat and smiling even though it was quite disappointing to see him go out the way he did after what had been a promising return to the Olympics for Sands, her former prot�g� from St Augustine’s College.

seems like the entire team was rusty, dusty and full of cobwebs. Four years to prepare nd they came this far to choke, or fumble and even tumble..need to try fnd out where things went wrong and start thinking 2016..a new beginning