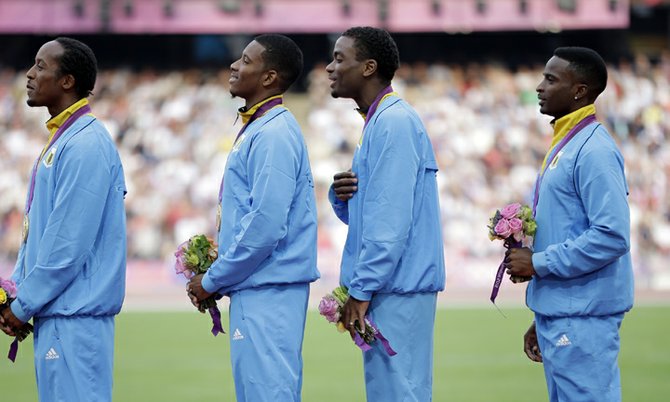 The gold medal-winning Men's 4x400m Relay team will arrive back in Nassau at 6.30pm tonight. From the airport, Chris Brown, Demetrius Pinder, Michael Mathieu and Ramon Miller will head to Mario's Bowling Alley at 7.00pm for a celebration.

The nation is still buzzing after Friday night's dramatic events at the Olympic Stadium in London, when Ramon Miller, of Team Bahamas, passed Angelo Taylor in sensational style on the final lap.

The Bahamas Relay team won in 2 minutes, 56.72 seconds, a national record time, ahead of the US, which came second and Trinidad & Tobago, which finished third.

Bahamians went wild, in their homes, in bars and cafes across the islands. The 26-member Bahamas team had won its first medal of these games - and it was gold.

In a simply stunning finish, Ramon Miller closed out the race with a lap of 44.1 seconds to make history.

“It’s been a long journey for me,” said Chris Brown, who ran the opening leg.

“I’ve been here for a long time and this is my first Olympic gold medal. It took me a long time. The United States is a tough team to beat.”

Angelo Taylor was handed a 10-metre lead when he received the baton, but Ramon Miller chipped away.

By the final stretch, Miller lived up to his nickname of ‘fearless,’ and stormed from behind to pass Taylor. The rest is now history.

The Americans had won gold the previous eight times they had competed, missing out only at the boycotted 1980 Moscow Games.

The Bahamas had dethroned the US.

On Saturday afternoon the history boys were out before the cheering crowds again - this time standing proud as the medals were handed over and the Bahamas’ national anthem sounded out.

Bahamians watched, clapped and cheered the ‘Golden Boys’ - recalling the win by the ‘Golden Girls’ at the 2000 Olympics.

The USA and Trinidad & Tobago stood at attention and applauded Team Bahamas for their efforts.

Miller told The Tribune afterwards: “It’s sweet. Who wouldn’t feel sweet with a gold medal. We worked hard all year and this is the outcome of it.”

For Pinder, it was a bitter-sweet moment.

“Just putting the medal around my neck, all I could do is remember my sister,” said the man who had run an exceptional second leg.

“It’s a blessing to come out here and get gold, so I’m very proud,” he said.

Pinder’s sister, Claudia, passed away and was buried while he was in London preparing to run both the 400m and the 4 x 400m.

Michael Mathieu, who had the most difficult leg to run on third with the huge challenge from American Tony McQuay, said afterwards: “We won the gold. It was sweet.”

Brown, the senior man on the team, said: “It’s history. I thank the Bahamian fans, but we had to do this one for Leevan [Sands], who would have definitely won a medal if he didn’t get hurt and to Demetrius for what he had to go through with the loss of his sister.”

Bahamas Olympic Committee president Wellington Miller was jubilant, saying: “It feels great. Seeing those guys, when Ramon took down the American on the home stretch. Oh what a feeling!”

Prime Minister Perry Christie said: “The magnificent quartet have done our nation proud. The entire race from start to finish was a model of discipline, precision teamwork, strategic planning and superlative execution. The final leg of the relay run by Ramon Miller was particularly brilliant.

“This is a great day for The Bahamas. A proud nation stands to attention and salutes four of its finest sons.

“May I also take this opportunity to congratulate our entire Olympic team both athletes and coaches for their representation of The Bahamas in the London Olympics in a manner that demonstrated their discipline, commitment and skills in a most commendable way.”

The team’s performance left The Bahamas tied for 50th place in the 2012 Olympics, with Algeria, Grenada and Venezuela, out of a field of some 202 countries that had taken part in the biggest sporting event on the planet.

Last night Chandra Sturrup carried the flag for the country in the closing ceremony.

The Bahamas’ ‘Golden Boys’ are expected home tonight, at about 6pm at the Lynden Pindling International Airport.

They deserve a heroes’ welcome.

Congratulations guys. Yaul made me feel proud to be a Bahamian. Moreover, I now have the incentive to accomplish anything I set me mind to. Thanks!

Alittle bit of News for those who don't like the US, Majority of all the gold medal winners in the third world are trained in the US including the Chinese

@nyandorot. You are quite correct, the majority of us do train in the U.S., but that should not in the least bit belittle our achievement. I for one amoungst many have great love and respect for the US, but that should not mean I cannot express great pride in what a small little nation of just over 300K did in winning the mens relay. Our Jamaican brothers actually did very well at the these Olympics. Usain, Yohan, and Wier (1st, 2nd, and 3rd in the mens 200M) all trained at home and by Jamaican coaches SO I guess there is some hope for us third world countries in going up against the "superpowers" after all. See you in Rio!