Pm: Each 'Golden Knight' Will Get A 'Plot Of Land' 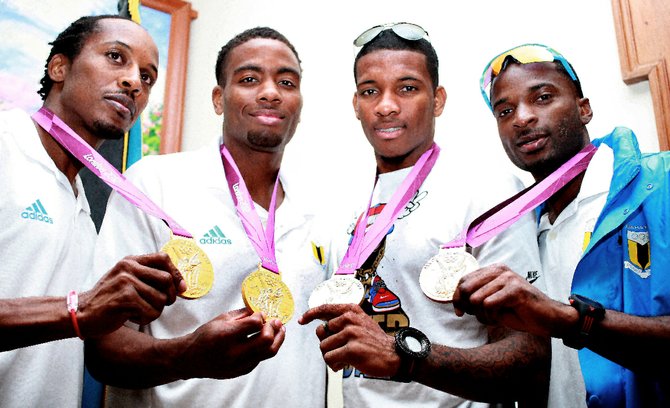 In similar fashion to the “Golden Girls” after their triumph in the women’s 4 x 100 metre relay at the 2000 Olympic Games, the “Golden Knights” will each be awarded a plot of land in the Westridge area for their gold medal performance in the men’s 4 x 400 relay at the 2012 Olympics.

Prime Minister Perry Christie made the announcement during a luncheon at the Hilton hotel where he, along with Gail North-Saunders, Christine Jones Darville, Elaine Thompson and Althea Rolle-Clarke, were reorganised for their participation in the Central American and Caribbean Games in Kingston, Jamaica.

North-Saunders, Jones-Darville and Thompson made history as the first three Bahamian women to represent the Bahamas on August 21, 1962, when they all ran the 100-yard dash. On August 25, Rolle-Clarke joined the trio to compete in the first relay in the 4 x 100 event.

Christie, who celebrated his 69th birthday yesterday, was honoured for winning the Bahamas’ first international field medal in the triple jump on August 22. He said he was delighted to be reunited with the women, whom he remembered as they carried the banner for Bahamian women.

The luncheon was attended by Chris ‘Fireman’ Brown, Demetrius Pinder, Michael Mathieu and Ramon ‘Fearless’ Miller, who have been on a whirlwind experience since returning home as the 2012 Olympic 4 x 400 metre relay champions in London, England.

The quartet was back in Nassau after spending all day on Monday in Grand Bahama where they were shadowed with more gifts and a float parade. Pinder and Mathieu are natives of Grand Bahama.They are back on the road today as they head to Eleuthera where Brown is expected to be welcomed home as a native of Wemyss Bight.

“The Government of the Bahamas,” according to Christie, “will honour them appropriately with a plot of land in the same area of West Bay Street where the ‘Golden Girls’ got their land. I had to check to make sure that there was sufficient land. There is sufficient land.”

The details for the exact amount of land is still being worked out by Minister of Youth, Sports and Culture Dr Danny Johnson, according to the nation’s leader.

But the prime minister said he will present all four athletes with their paperwork in writing to confirm the deal today.

It was sweet music to the ears of the four athletes as they had anticipated being rewarded “in a meaningful way,” as originally outlined by Christie when they returned home last week from London. The government has already presented the quartet with more than $100,000 in cash. They also got a framed photograph of themselves in action in London.

Although the luncheon was to honour the pioneers of the sport, the “Golden Knights” took the spotlight and on behalf of his team-mates, Brown thanked everybody for their support and their belief in them because “we had to have a lot of belief in ourselves because we knew that we could beat the United States.

Having accomplished their goal, Brown said they are thrilled to have been the type of ambassadors that the young people, especially the boys and men, can look up to. He said they all came together as one and they got the job done. He also thanked the original members of the relay team for paving the way for them.

Each of the women expressed their delight in being a part of the first team of women to represent the Bahamas and they indicated how delighted they were to see the progress made through the years with the “Golden Girls” and now with the success of the “Golden Knights.”

The luncheon was organised by historian Alpheus ‘Hawk’ Finlayson through the Ministry of Youth, Sports and Culture. In addition to Dr Johnson and Sands, also in attendance were Bahamas Olympic Committee president Wellington Miller and secretary general Romel Knowles, who were all in London to witness the performance.

This is almost as if they'd won the Hunger Games.

But seriously, I've got news: the GOLD medal is the reward for olympic achievement. There is no logic to demand rewards for gold medals.

Interesting...when I read about where these guys were going, I thought the same thing in reference to the Hunger Games.

Considering the government gave 350 scholarships this year...all the gifts given to the athletes by the government are a real slap in the face to the 1300+ students who can't afford to attend college this year!