THE Downtown Nassau Partnership (DNP) yesterday threw its support behind metered parking for the Bay Street area, as one merchant told Tribune Business the lack of adequate parking in downtown Nassau was “a complete turn-off” to potential customers. 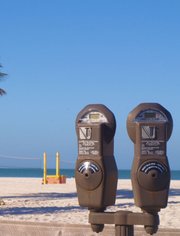 Head of the Bahamas Taxi Cab Union, Leon Griffin, said earlier this week that the organisation was backing the reintroduction of a towing system in downtown Nassau.

That system, he said, would be complemented by the debut of parking meters which would set a 30-minute maximum stay for motorists. Parking meters on Bay Street would force the downtown business owners to find places for their employees to park their cars, creating spots for local, he added.

Mr Griffin’s comments came after Minister of Transport and Aviation, Glenys Hanna-Martin, announced in the House of Assembly that designated parking areas for taxis will return to the downtown area, a move which the union supports.

The DNP, responding to queries by Tribune Business ,said in a statement: “The Downtown Nassau Partnership agrees with the taxi union that the spots allocated for general parking should not be occupied all day by employees, and hence supports the concept of metered parking which indirectly will control length of time.

“Metered parking will promote turnaround of spots to accommodate retail and restaurant customers.”

The DNP said, however, that it did not support the 30 minute duration as it was“prohibitive to those that wish to shop, dine or conduct business”.

Tim Lightbourne, owner of the Perfume Shop, told Tribune Business: “There is nowhere to park, the town is totally congested. It’s a complete turn-off.

Peter Philips, managing director of the Brass and Leather Shops, told Tribune Business that the issue of parking in the downtown area was a long-standing one.

“I think that parking down town is challenging, everyone sort of knows that. If someone wanted to do their back-to-school shopping they would probably go to the Mall at Marathon as opposed to coming downtown. I think that’s an issue that’s several years old,” he added.

ok, we had meters before and no one paid any attention to them, not the drivers and not the police. So what's going to be different now?