Honouring The Passing Of Sir Lynden

YESTERDAY, we, the PLP New Providence Women’s Branch of the Progressive Liberal Party, honour ed the legacy of the late Sir Lynden Pindling, marking the 12th anniversary of his passing. 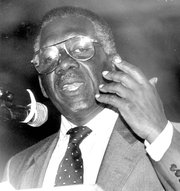 Sir Lynden Pindling KCMG, OM, PC, JP, former Premier of the Colony of the Bahama Islands, former Prime Minister of the Commonwealth of The Bahamas and former Leader of the Progressive Liberal Party, was born on the March 22, 1930 to Arnold and Viola Pindling, the late Sir Lynden (as he is fondly referred to), stood at the forefront of the Quiet Revolution in The Bahamas to usher in political freedom, social change and hope of economic prosperity for all Bahamians.

The man referred to in many circles as our “Black Moses” possessed the gift to unite the Bahamian people toward a common loftier goal. He rose up during an era when many third world countries and colonies were engaged in the struggle to freedom. A freedom fighter, he fought for proper representation of the masses by leading the cause toward majority rule, but unlike many of his counterparts across the globe, he did so in a manner that saw no bloodshed or major social unrest. Hence, he can be hailed as the leader of the Quiet Revolution in The Bahamas and was a respected leader both on the national and international stage.

He was a British educated attorney from Mason’s Addition and having been called to the British and Bahamas Bar in 1953, dedicated his life to the service of The Bahamas and the Bahamian people.

Sir Lynden joined the newly formed PLP as legal advisor in 1953 and eventually led the charge of the party to bring about social and political freedom for a people oppressed by a small oligarchy of businessmen. Sir Lynden was elected to the House of Assembly in 1956 at the age of 26 along with five other PLP candidates known as the “Magnificent Six”. He subsequently became the Parliamentary leader in the House for the PLP and leader of the PLP.

The succession of events that transpired leading up to Majority Rule, including the 1958 General Strike and Black Tuesday in April, 1965, are well documented. History also records the prominent role played by Sir Lynden, his contemporaries and women of the suffrage movement in the struggle for the disfranchised and marginalised in our Bahamaland at the time. In spite of the PLP’s loss to the United Bahamian Party (UBP) in the 1962 general elections, Sir Lynden was not deterred and went on to lead the PLP to victory at the polls in 1967 defeating the UBP and making history by becoming the first black Premier of The Bahamas and forming the first black majority government in the Bahamian Parliament.

Sir Lynden led the PLP to victory at the polls in six consecutive general elections and was elected to parliament nine consecutive times until his retirement from frontline politics in 1997. The records reflect and the testimonials attest to the fact that Sir Lynden provided stellar representation on behalf of the people of Nassau’s Southern District and later the people of Andros.

Sir Lynden led The Bahamas to Independence in 1973 and orchestrated and implemented multiple economic and social reforms. Among the many accomplishments during his tenure were the institution of National Insurance to provide social security to Bahamians, the establishment of the College of The Bahamas to provide expanded higher education for Bahamians post-secondary school, the launch of Bahamasair as the national flag carrier, the institution of the Bahamas Games to foster national unity and develop athletics in The Bahamas as well as the formation of Royal Bahamas Defence Force to protect our borders and marine resources.

Under the leadership of Sir Lynden, thousands of Bahamians had the opportunity to receive secondary and tertiary education both at home and abroad, jobs that had once been restricted from Bahamians were made available and health care services were expanded to meet the demands of a growing population. The construction of clinics in residential areas to decrease the burden upon the general hospitals made healthcare more accessible and affordable to Bahamians.

The security and stability of communities was also facilitated by the building and equipping of police stations within various constituencies. The creation and expansion of the middle class in The Bahamas following Independence can be attributed to the vision of Sir Lynden and the founding fathers of our nation. This vision gave birth to the Bahamianisation Policy which was spearheaded by Arthur D. Hanna ensuring that qualified Bahamians were not overlooked for jobs and were trained in various professional areas. An expansive housing programme which enabled more Bahamians to become homeowners is also a product of the foresight of Sir Lynden and his contemporaries.

Sir Lynden was more than a politician and a policy maker; he was a statesman who fought until his retirement for the rights and liberties of not only Bahamians, but also of those that were victims of racism, discrimination and social injustice. He supported the Civil Rights Movement in America led amongst others by the late Dr Martin Luther King Jr with whom he had a cordial relationship. He also joined the fight against apartheid in South Africa by serving as the Chairman of the Commonwealth Heads of Government Meetings (CHOGM) Special Group to free Nelson Mandela and end apartheid. Sir Lynden believed that The Bahamas had just as much to offer as any other country in the world and could make major contributions on issues affecting small states and the world at large. It was this belief that led him to lobby for the 5th Conference of Heads of Government Meeting of the Caribbean Community to be hosted in The Bahamas in 1984, just one year after accession to the Community. The Bahamas also hosted the 8th Commonwealth Heads of Government Meeting in 1985 and gained admission to the UN under his watch.

Sir Lynden received several national honours including the Order of Merit and was knighted as a Knight Commander of the Order of St Michael and St George. Sir Lynden also served as a Privy Councillor within Her Majesty the Queen’s Privy Council. He was hero, mentor and friend to many, including both Prime Ministers who succeeded him in office and other parliamentarians. He was a man who possessed vision for his time and beyond his years while making an impact both on the national and international stage.

The New Providence Women’s Branch of the PLP honours the legacy of the late Sir Lynden O Pindling – the father of our nation and a true Bahamian patriot. Today we pay homage to a great man whose name has been and will be written in history for the positive impact he made on The Bahamas.

Surely this man was very corrupt accepting millions of dollars for keeping quiet and protecting the massive cocaine smuggling operation on the Bahamian island of Norman's Cay run by Carlos Lehder the master cocaine smuggler.

Just shows that good people can also be corrupted, we all must be careful.

His knighthood should be revoked, even after his death.