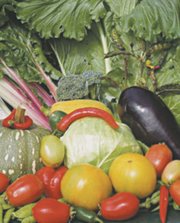 A new vegetable season is just around the corner and that means a little bit of planning in order to get things right.

The prime consideration is what to grow. We are often tempted to buy attractive packets of seeds of vegetables that we will not enjoy eating when they reach maturity. Figure out what you and your family eat on a regular basis and go from there. A garden full of swiss chard is wonderful – if you eat it. Otherwise, it is a waste of space.

Bear in mind the value of the vegetables you grow. Onions, for instance, are usually available year round in the store and are cheap. Little bunches of scallions, however, cost close to a dollar each and if you use scallions regularly you will benefit from having your own at hand.

Green peppers are cheap, red peppers are more expensive, and yellow and orange peppers are very expensive. It makes sense to grow the expensive peppers. The seeds are the same price; the care is identical.

The careful gardener will take pains to avoid having too many of one vegetable at the same time, a glut. By using the technique of successive sowing we can have the vegetables we like in suitable amounts spread out through the growing season.

This is done by staggering the sowing of seeds and only planting the numbers that can be used by the family. This requires a certain amount of garden space left in reserve for future crops and the temptation, of course, is to fill the garden.

In order to get things right we must be aware of the time it takes for each vegetable to mature. By and large there are three groups of veggies: 60 days, 90 days, and 120 days. Pay no attention to the growing time on the seed packet; that was set under perfect conditions and was probably a world record.

Most vegetables are 90-day producers and include peppers, tomatoes, cabbage, corn, beets, summer squash, and cucumbers. The second and subsequent crops should be sown a month apart except for peppers, which should be replaced after about three months.

Some 120-day vegetables take even longer. Some onions, for instance, take 260 days. Eggplants, tomatillos, pumpkins, winter squash, carrots, and fennel are examples of 120-day crops. These also can be staggered a month to six weeks apart.

Then we have to consider that many vegetables require certain conditions in order to be at their best. Lettuce, garden peas, and spinach are cool weather crops and should be planted in October and grown until April or May.

Tomatoes will not set fruit until the nighttime temperatures drop below 68 degrees. This occurs towards the end of October so we need to have tomato plants established by then. Seeds sown now and in early September should be ready for the cooler nights.

Peppers and eggplants are warm weather crops and can be sown now and September. Onions can be started in September but they should be of the right type, short day varieties. Long day onions do better sown in December to take advantage of lengthening days. Scallions can be started now, as well as cabbages, chicabs, summer squash, beets, chard, and cucumbers.

With a little planning we can get the most out of our garden resources and have a fully productive vegetable growing season.