WEDDING guests in Eleuthera are outraged after a Progressive Liberal Party candidate allegedly "crashed and campaigned" at a reception over the weekend. 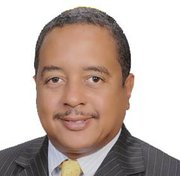 Bridal party members said they were shocked when Damien Gomez, PLP candidate for Central and South Eleuthera, accompanied by Sammy Sands, arrived with a box of tee-shirts and began speaking to guests on Saturday.

Before Mr Gomez arrived some of his agents were already at the reception, among them Austin Knowles Jr. Gomez and Sands arrived later with the box of shirts, they said.

Mr Gomez denied the claims last night and said that he only attended the event at Palmetto Point to drop off some shirts for a supporter.

"It was held at one of my supporter's house," Mr Gomez said.

"He had asked us to bring some shirts for him, I did that. If anyone is offended by it, it was unintended, he needed it for the evening. Now if he gave it to other people, it was his house and he is entitled to do what he wanted to do."

He added: "Some people are overly sensitive. That's just madness, it didn't happen like that."

Mr Gomez said that he did not hand out shirts to any of the guests at the party.

However, family members of the newlyweds disputed Mr Gomez' account, claiming that he shook hands with certain guests and circulated among them for about an hour.

He had not been invited to the reception, they said.

One distressed relative said: "They were giving out PLP t-shirts and basically campaigning, taking over the reception. It was very disrespectful, they were unwelcomed. They had an event that night, I guess they were canvassing people to come. It was total disrespect to the wedding party, they weren't invited, and giving out shirts?"

Another guest said one of Mr Gomez' agents offered the groom a tee-shirt, which was rejected. The groom told him that he did not want the shirt. He said he had been an FNM all his life and always voted for Hubert Ingraham.

"Some of the guests cussed out the agents for insulting them with the tee-shirts," said another guest.

Mr Gomez confirmed that the PLP hosted a "Grill and Chill" in Palmetto Point on Saturday night. He said the event drew a crowd of 300 people.

"It was pretty good for a Family Island crowd. We ran out of shirts, we have to get some more," he said.

However, his version of the wedding reception differed slightly from that offered by Mr Gomez.

He told The Tribune: "I was with Mr Gomez all day yesterday (Saturday). We went to two weddings and a funeral.

"We gave out t-shirts and hats and talked to supporters after, because you know, they want to talk to him.

"The purpose was just to talk to people and ask them to support Mr Gomez."