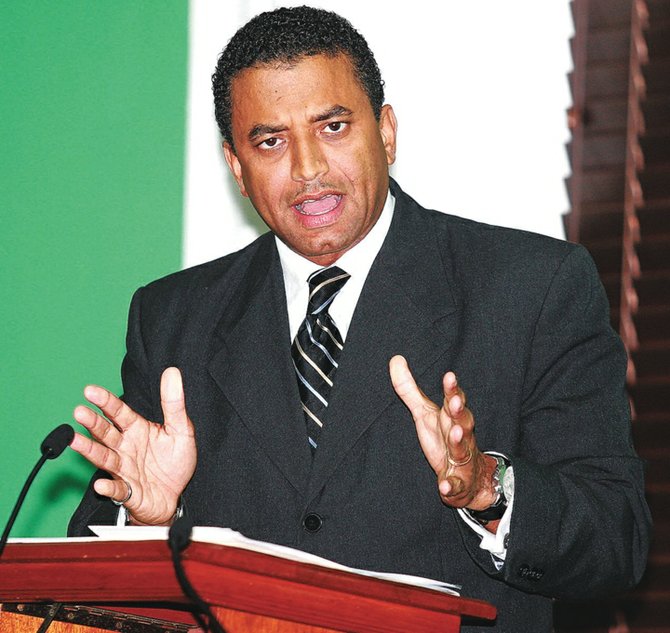 DNA leader Branville McCartney is predicting employees at Atlantis will be laid off within the next six months.

Almost 8,000 Bahamians depend upon the resort and the One&Only Ocean Club for their livelihood, but Mr McCartney insists their employment has been placed "in jeopardy" by the recent deal between Kerzner International Holdings and Brookfield, which transferred ownership to the Canadian asset management company.

According to Mr McCartney, the resort will need to cut staff following the general election in order to meet the terms of the management agreement, which requires an annual profit increase of 20 per cent.

At a press conference at DNA headquarters, Mr McCartney questioned how Atlantis could achieve a 20 per cent a year profit increase without making staff cuts or reducing maintenance costs.

Kerzner transferred ownership of the Atlantis resort to Brookfield Asset Management as part of a debt restructuring move.

The deal is a debt-for-equity swap worth $175 million.

Under the agreement, Kerzner will continue to control all aspects of the operations at the resort and other properties, which are expected to continue running as they always have.

Addressing the House of Assembly following the announcement, Prime Minister Hubert Ingraham assured all Bahamians employed at Atlantis that their jobs are secure, with employment and expenditure levels to remain the same under the new owners.

He said: "I have been assured that Brookfield shares Kerzner's commitment to continue future capital expenditure and maintenance of the resort at levels sustained over the years, and further investing the same levels of resources into local and international marketing to support tourism in the Bahamas and to ensure the brand's visibility.

Mr McCartney said he came to his conclusions after reviewing certain information, but declined to reveal his sources.

Mr McCartney said if lay-offs do come, they will be the result of "poor decisions" made by the former PLP administration.

Specifically, he blamed the PLP for "allowing" Kernzer to leverage Atlantis properties in order to secure loans to build in other countries.

"The decision to leverage these properties was a bad decision," said Mr McCartney, "and certainly not in the interest of the Bahamian people."

He said the blame must also be shared by the current FNM government, which he accused of downplaying the impact of the ownership change.

"The prime minister's assertion to the general public that this transaction will not jeopardise Bahamian people is simply not true," said Mr McCartney. "He is aware of the risks."

Brookfield declined to respond directly to the DNA's allegations, but vice president of communications and media Andrew Willis said all staffing decisions would be made by Kerzner.

When contacted for comment, Atlantis vice president of public affairs Ed Fields reiterated the company's statement at the announcement of the ownership transfer: "Kerzner and Brookfield are aligned with regard to the best interests of the business moving forward, including: keeping future capital expenditures and maintenance levels consistent with years past; maintaining current employment levels and investing the same level of resources into local and international marketing to support tourism in the Bahamas and maintain brand visibility."

With regard to specific questions on the DNA's claims, Mr Field said, "it is not our practice or policy to comment on rumours."