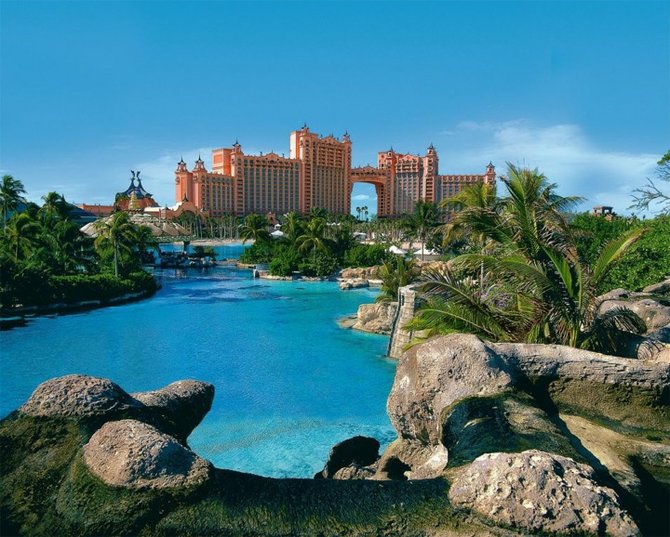 Atlantis eyes up to 40% cut in cruise day visitors

Atlantis plans to “moderate” the number of cruise passenger day visitors to 60-70 percent of pre-COVID levels, it was disclosed yesterday, with the resort “definitely” set to meet or exceed its 2022 financial targets.

ATLANTIS 6,000 BACK AT WORK: Staff return to full hours as surge in bookings arrives

ATLANTIS Paradise Island has 6,000 staff members back to work for the holidays as the resort is reporting full occupancy well into the New Year.

Taxi union hits out at Atlantis

The Bahamas Taxicab Union (BTCU) yesterday hit out at Atlantis in a row over the enforcement of COVID-19 health and safety protocols, asserting that a recent incident was the “straw that broke the camel’s back”.

‘Some will welcome it - but not everybody’

BAHAMAS Hotel Catering and Allied Workers Union President Darrin Woods said Atlantis’ decision to lay off 700 workers was inevitable and will be welcomed by the scores of employees who agitated for severance cheques.

OVER 800 young male and female gymnasts from more than 56 countries are expected in The Bahamas to participate in the fifth Atlantis Crown Invitational at the Paradise Island resort December 17- 21.

THE new national minimum wage of $210 could have a dire affect on one of the country’s leading hotels, as there is some suggestion that the 40 per cent wage hike might result in job reductions.

WHILE job security remains uncertain for the more than 2,000 Bahamians employed at Baha Mar, an Atlantis executive said the resort would consider hiring staff of the $3.5bn project based on its needs.

One of Atlantis’s retail ‘pioneers’ yesterday said he was aiming to establish a second store at the Royal Towers within three years, the recent expansion of his inaugural outlet having sparked a 20 per cent sales increase.

Atlantis security to be ramped up after robbery

KERZNER International plans to ramp up security at Atlantis after tourists were targeted for a second time at the resort this year.

VISITORS and employees of the Atlantis Resort were both startled and baffled as a team of Immigration officers disrupted operations at Dolphin Cay to detain and carry off the attraction’s head sea lion trainer.

Atlantis is eyeing an “exceptional” March with “across the board” occupancies in the low-mid 80 per cent ranges, its senior executive telling Tribune Business the resort had beaten early 2012 comparatives and was hitting this year’s performance targets.

Atlantis’s 2015 group booking pace is up 132 per cent, its top executive said yesterday, with the Paradise Island resort’s booking for the past three months “off the charts”.

SEVERAL major Nassau-based hotel properties are expecting a successful fall 2012 season, with an Atlantis executive telling Tribune Business its bookings for the season were expected to be 8 per cent ahead of 2011 numbers.

KERZNER International is earning base management fees equivalent to 2 per cent and 3 per cent of gross revenues generated, respectively, by the Atlantis and One &amp; Only Ocean Club under the terms of its $2.5 billion debt restructuring, Tribune Business can reveal.

KERZNER International has "fired the gun" on what is expected to be a $60-$65 million capital investment programme at the Atlantis resort in 2012, its Bahamian head saying performance targets set by the new owners would not involve "miracle work" to meet them.

THE investment group that made a $3.4 billion offer to acquire Kerzner International in 2010 yesterday accused a former consultant of leaking documents related to the deal to Tribune Business, alleging that he was trying to embarrass both itself and the Atlantis owner.

KERZNER CHIEF: 'NO JOB LOSSES' KERZNER International's president today confirmed Prime Minister Hubert Ingraham's statement that no employees will be laid off as a result of the ownership transfer of the Atlantis resort from Kerzner to Brookfield Asset M

By NATARIO MCKENZIE Tribune Business Reporter nmckenzie@tribunemedia.net THE management agreement between Kerzner International and Atlantis' new owners requires the Paradise Island resort to increase profits by up to 20 per cent each year, Democratic N

By CELESTE NIXON Tribune Staff Reporter cnixon@tribunemedia.net DNA leader Branville McCartney is predicting employees at Atlantis will be laid off within the next six months. Almost 8,000 Bahamians depend upon the resort and the One&Only Ocean Club for

By NEIL HARTNELL Tribune Business Editor Brookfield Asset Management's ownership takeover at Atlantis and the One & Only Ocean Club has been described by a leading accountant as "the best thing that ever happened for the Bahamas". Raymond Winder, managin